Disney's Frozen is this week's subject on Escape to The Movies. And not just because it was physically impossible to find six minutes worth of remotely interesting things to say about Homefront; because it's a terrific movie in its own right and features several significant shakeups to that most unchanging of Hollywood formulas: The Walt Disney Animated Fairytale (or "Disney Princess" movies, to use the contemporary vernacular.)

The review covers a lot of ground: The characters, premise, production and even much of the film's first act since as is typical - the plot is heavily frontloaded so as to get the cast hurried along on a quest by Act 2. One thing you won't find is any discussion of anything that happens in the film's third act. That's by design, since Frozen can count among its myriad charms the one thing you just never expect to see from an animation studio whose signature brand is rigidly-formulaic retellings of stories so old your great-grandmother grew up hearing them:

But first, to the story - for those of you who (for some reason) are here without having watched the movie or the review: Frozen takes place during what is technically Summer in the vaguely-Norwegian kingdom of Arendelle and concerns two sister princesses, Elsa (the older one) and Anna. Unknown to anyone but herself (their parents are dead, because Disney) Elsa was born with mystical ice-powers that once accidentally inflicted a nearly-fatal injury upon Anna, who has no recollection of the event (or Elsa's powers) thanks to a memory-affecting magic cure. She's spent most of her life in self-imposed isolation, afraid of hurting anyone else and of being marked as a witch. But now having reached adulthood she's to be officially crowned Queen and the palace is being opened to a throng of foreign dignitaries; which terrifies her but thrills Anna - who's aching for affection and harbors amusingly Disney-specific illusions of meeting her Prince Charming at the party.

Unfortunately, Anna does meet and fall head-over-heels in Disney-branded Love At First Sight ™ with handsome, charming, all-around great fella Prince Hans; and effectively being an adult-sized child (Elsa is similarly arrested, but in her mid-teens) immediately accepts a marriage proposal (Hans is of a similarly reckless disposition) and starts blurting out excited plans to an incredulous Elsa, who would rather not have a brood of in-laws filling up the place. They argue, and Elsa lets out a pent-up blast of ice magic that the scheming Duke of Weselton (who more-or-less introduces himself with "I'll be your villain for the evening") takes as cause to declare her a "monster" and run her out of town Frankenstein-style.

Elsa resolves to go full-hermit in the mountains, finally releasing her full power to create a private ice-palace. Unknown to her, this also drops a permanent winter freeze over Arendelle, stranding the dignitaries and imperiling the citizenry. Anna partners up with a wilderness-experienced ice salesman named Kristoff and heads up the mountain to try and fix things (gambling that Elsa will listen to her), leaving Hans in charge of holding down the fort at the castle.

SPOILERS, as you were already warned, follow from this point on. 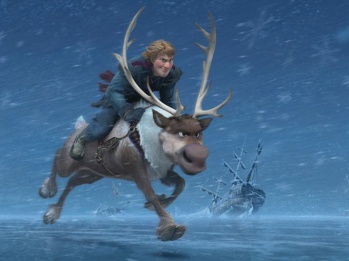 This is where things start going "off-script," at least in so much as Disney has been making roughly the same Princess story off and on since The Little Mermaid brought the brand back to prominence in the late-80s: Kristoff is mainly helping Anna up the mountain because, as an ice farmer, endless winter is bad for business. He starts out not taking her very seriously (Anna is no Merida, her guts far outpaces her ability) and does less so when he learns of her hasty engagement. He even gets an extended monologue slamming the whole concept of Love At First Sight™!

Now, since we know our Disney, and since Frozen is doing its very best to - apart from the computer-animation - look, sound and feel like vintage 90s Disney especially, we know this has to be setting Kristoff up to learn a lesson about not being so damn cynical. The Disney Renaissance (aka everything made between Little Mermaid and Tarzan) it's so determined to recapture was entirely predicated on this specific plot device: Eric and Ariel. Aladdin and Jasmine. Pocahontas and John Smith. Only Beauty & The Beast breaks it a little, and even then not all the way. Hell, in Mulan it happened for Li Shang even though he wasn't yet aware Mulan was female! (and it's not like Shang was gay - watch his quick "Oh thank GAWD!!!" take when the truth comes out.)

Hell, we even keep cutting back to see how right Anna was about Hans being an awesome guy: He's back at Arendelle doing Awesome Guy Stuff like standing up for Anna's authority, putting Weselton in his place (he only showed up to try and manipulate the young Queen into a trade agreement and now thinks maybe he can score even bigger) and converting Castle Arendelle into a makeshift refugee camp for the freezing peasantry. He's a total mensch, basically - only stepping away from his post to lead a rescue mission when Anna's horse comes back without her (long story.) Sure, he fails to notice that Weselton has added two henchmen to his party with orders to incapacitate (or kill) Elsa if they get the chance... but nobody's perfect.