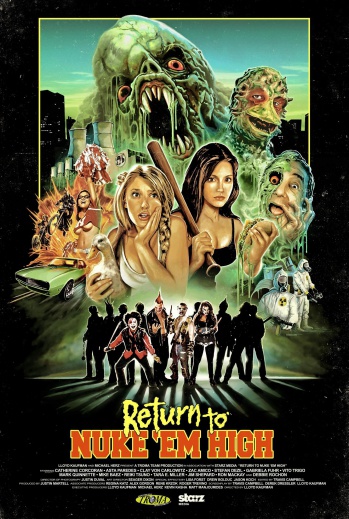 Much has been said about Troma over the years, by myself and by others, but its amazing how well the New York-based indie provocateur outfit has not only survived but thrived (culturally, if not financially) into the 21st century. Ever the master of buzzwords, Kaufman once branded his output Movies of The Future!, but it's still almost eerie how well the Troma in-house ethos - a mash-up of bargain-basement sleazebag catharsis and rage-fueled, feces-flinging leftist agitation - precedes the era of Occupy and "artcore." The films' fictional town of Tromaville is located in New Jersey for easy working-poor class metaphor purposes, but isn't it amusing that the original TOXIC AVENGER's villain was a corrupt, corpulent NJ politician? And I can't be the only person who first thought of Troma when the company that spilled toxic sludge in West Virginia's water supply turned out to actually be called Freedom Industries, can I?

All activism starts out at a point where the genuinely justice-driven are indistinguishable from the opportunists and the firestarters who just want to watch the world burn; think Movement Feminists as comrades-in-arms with Hugh Hefner at the birth of the Sexual Revolution, or more pointedly Nelson and Winnie Mandela before his rebirth as a champion of nonviolence. That moment is the headspace Troma has never stopped occupying, and it's part of the reason that jolly "Uncle" Lloyd Kaufman marshals fierce devotion from each new crop of earnest movie-loving youngsters who pass through the Troma boot-camp. (James Gunn, now directing Guardians of the Galaxy for Disney/Marvel, is one such graduate.) Kaufman is, albeit from across an ocean of time and experience, one of them: Mad at the world, hungry for change, but also looking to party amid the fight.

Case in point: The original 1986 Class of Nukem High took place in a Tromaville High School whose student-body and social structure had been mutated into grotesque parody by fallout from the mismanaged nuclear power plant next door. Its heroes, a classic good-kid couple, dealt with unwanted pregnancy and social/sexual pressure while battling the mutant Cretins Gang (pre-fallout, The Honors Society) and their own radioactive-monster offspring. It was followed by two sequels of less renown, that opening-narrator Stan Lee (yes, that one - he's an old friend of Troma) literally fast-forwards through in the prologue of the new film - though he does pause on some of the nudity...

In Return Vol. 1 (it ends on a cliffhanger, part 2 is forthcoming) our 21st century Troma High heroes are now a newly-minted lesbian couple (a working-class environmentalist blogger and a rich girl new to town) and the Big Bad has moved from nuclear power to unscrupulous food corporations. The Tromorganic Foods factory, built on the ruins of the power plant (it was torn down, according to Stan Lee, because "criticizing nuclear power is no longer cool") has a lucrative contract to supply revolting bargain-priced food to the school cafeteria; and their tainted taco meat (eventually implied to be made from abducted students) is responsible for this iteration's round of mutations. Kaufman himself plays the manic Tromorganic CEO, and gets to deliver intentional groaners like "They keep saying we gotta go green! Well, that looks pretty green to me!" in reference to a barrel of toxic waste.

Subtlety has never been Troma's strong suit. To hear Kaufman tell it, that's part of the point. He's been known to say, always with only a slight hint of hucksterism, that the studio's slapdash, no-budget approach turns the films into "interactive experiences" - that the audience being able to see the obvious fakery of the effects (and the shamelessness of the sex-sells sleazier parts) offers a participatory experience. In Return, you can see that approach extending to its messaging: The villains bellow the political/ideological motivations for their evil directly to the camera, as do the good guys in the opposite direction, in a manner that loudly screams "Yeah, there's a message here, why pretend otherwise?" At one point, gunfire rings out in the cafeteria and everyone ducks for cover until one of the heroes (credited, for real, as "The Black Guy") stands to reassure them: "It's okay! It's just another school shooting - CNN doesn't even cover these anymore." Yes, a school shooting is a literal background-joke - it's that kind of movie.