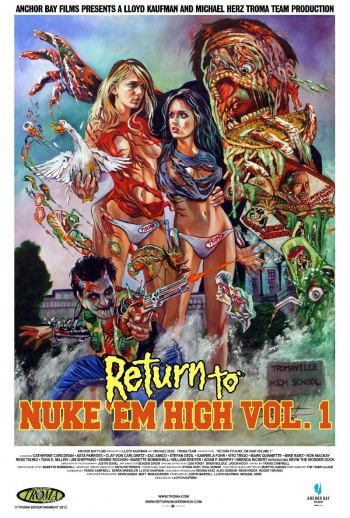 Same goes for the film's concept of pop-culture parody. A new-millennium iteration of The Cretins is on hand, but this time they originate as Tromaville High's Glee Club - conceived as a savage parody of "GLEE's" politically correct earnestness: A wheelchair-bound member also sports elaborate dental headgear, a lone Jewish member carries a menorah with him lest we forget for a moment how inclusive they are, etc. Post-mutation, the Lea Michelle stand-in communicates via animalistic sonic-screams.

And, of course, there's no missing the similarity of the film's central rich-girl/poor-girl romance to the much-lauded Blue is the Warmest Color. In fact, the two films were both at Cannes last year, where festival organizers are said to have prevented Kaufman from staging a mock wedding for his starlets in support of France's impending legalization of gay marriage (and, of course, in promotion of the film.) I can't help but wonder what critics of Blue's soft-focus, elaborately-choreographed sex scenes would have to say about this film, which features similarly-adoring focus on its lead couples' lovemaking (sometimes with each other, other times by themselves) but constantly undercuts any semblance of "male-gaze" pandering with squooshy cartoon sound-effects, flatulence and other gags that most gross-out movies section-off from their "resident hotties." (If the Troma approach to equality could be summed up in a sentence, it might be "Everyone is gross, therefore everyone is also beautiful.")

It's hard - maybe impossible - to offer a proper criticism of a Troma movie at this point. How do you mark something down for being a sloppy mess (which Return to Nukem High - Vol. 1 most definitely is) when "A Sloppy Mess!" is exactly what's on the label? Three decades and counting in, Troma (and Kaufman) have carved out a niche that belongs only to them: Movies that rage against The System with the sincere fervor of a Tumblr social-justice blog on bath-salts (while discussing whether or not they should come out of the closet, one half of Return's Sapphic lovebirds reminds her partner that in homophobic Tromaville LGBT might as well stand for Lynch, Grope, Beat & Torture,) while also playing The Gross-Out Game with a mind sicker than the world's most insensitive fratboy. (The military-action shoot-em-up Troma's War featured a terrorist plot to invade America with a disease-spreading rape-squad codenamed "The AIDS Brigade.")

A Final Anecdote: Obviously, I wasn't going to pass up a chance to get an autograph and a photo with Lloyd Kaufman. He did, indeed, sign my Toxic Avenger DVD, and I got a laugh from him and Pat when I mentioned that he and James Gunn's book "Everything I Need To Know About Filmmaking I Learned From The Toxic Avenger" was instrumental in my opting to study film instead of something more practical in College (and that, consequently, my parents probably still hate him.) As he scribbled "To Bob, Toxie Loves You!" on the cover sleeve, he mused "Autograph! Sure, I'll autograph anything! Y'know, I'm gonna die soon so this'll probably be worth something!"

Heh. Usually, that'd be a pretty dark joke coming from an older man - celebrity signing autographs or otherwise. But coming from this guy, in all but appearance the same temperament, energy and enthusiasm as the twenty-somethings from the cast and crew flanking him, it went over like just one more Troma absurdism. Dead? Done? This guy? This wide-eyed 19 year-old filmschool kid who for some reason showed up to his own premiere in the costume of an unassuming old man?