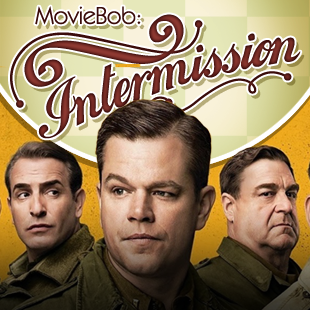 The Monuments Men is a good movie that feels like it ought to've been great: a fact-based caper movie crossed with a WWII adventure with a cast of reliable drama/comedy heavyweights and a welcome message about the importance of art and culture. But somehow it doesn't quite get there - starting from a comfortable position effectively guaranteed by its sizable pedigree but never really rising beyond that point. It's the sort of movie you'll catch some afternoon on TBS years from now, enjoy, but then struggle to remember the name of in conversation a day later.

The film is named for and (loosely) based on the exploits of a real organization formed during World War II on the ideal that the coming postwar rebuilding of Nazi-ravaged Western Europe would be substantially more difficult if as much of various nations' treasured artwork, landmarks and monuments as possible were spared from destruction - whether it be intentional carnage inflicted by the retreating Germans or friendly misfire by the Allies. During the war-proper, The Monuments Men (primarily artists and art-historians drafted for their expertise) were most well-known for helping formulate precision bombing-strikes to minimize damage to priceless architectural relics in cities like Florence; a then-controversial practice that also figured in the plot of Quentin Tarantino's Inglorious Basterds, wherein the film-within-a-film Nation's Pride implies that decorated Nazi sniper Frederic Zoeller (Daniel Bruhl) owed his supposedly-miraculous kill-streak not to providence but to the Americans unwillingness to fire on the historic bell tower he'd taken shelter within.

The connection is amusingly appropriate, since Basterds could be effectively considered a splatter/sleaze parody of the kind of jaunty "guys on a mission" WWII-set romps that ruled cinemas in the 50s and early-60s that The Monuments Men seems to unironically aspire to. Indeed, its not hard to imagine the same basic film being made with relatively few differences half a century ago with actors like Burt Lancaster, Jimmy Stewart or Gary Cooper (perhaps backed up by the comic stylings of Andy Devine or Burt Lahr) striding through the same seriocomic set pieces.

The star presence of director/producer George Clooney - who channels oldschool Rat Pack-era Hollywood swagger - makes this retro-affectation pretty explicit early on, and it's cemented when The Artist's Jean Dujardin (who might as well be Clooney's French doppleganger when it comes to time-displaced old-Hollywood "glammachismo") turns up as the team's En Francoise Sixth Ranger. The real Monuments Men were actually a fairly large network of organized efforts, but the film zooms in to present a single scrappy team of frontline misfits for dramatic investment - think of them as "Ocean's Raiders of The Lost Ark." 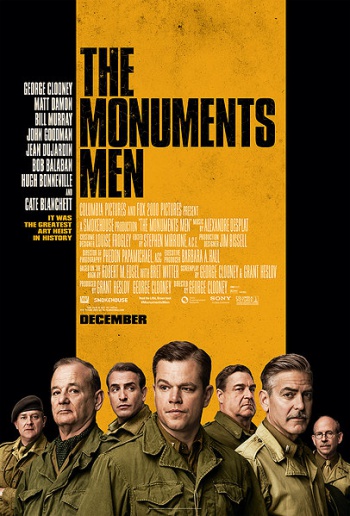 Unfortunately, the other things the film shares with Golden Age big star diversions is an overly episodic "and then" structure and a tendency toward narrative oversimplification. The "Monuments" part of the title gets its obligatory nod, but the film is in a notable hurry to the "sexier" part of the story: The team's post-D-Day role as treasure hunters, running down the famous paintings and stockpiles of Nazi gold being hidden as Germany is pushed out of liberated areas. It settles too early into a comfy, easygoing narrative rhythm: hiding-place uncovered, music swells, Clooney holds up famous painting, sardonic quip, repeat - and then decides "Yup, that's good enough. We'll just ride this through to the credits, fellas."

The shift from wartime to cleanup fits with the emphasis on what amounts to a treasure-map yarn, but robs the narrative of an urgency it contrives to replace with mixed results: Yes, of course, a lone Nazi officer has to "make it personal," and yes he's a former Death Camp overseer in addition to an art thief. Yes, our heroes find themselves in a ticking-clock race with unscrupulous Russian counterparts who scheme to KEEP rescued artifacts for war-reparations. Were Captain America himself to pass by in the background, he'd almost be injecting a note of subtlety.

Not that it's not entertaining in spite of its curiously limited ambition: Clooney's repertoire feels like a genuine reflex at this point (head down, glance-up, deepen-register) and Matt Damon pulls his Will Hunting Crouching Puppy, Hidden Genius routine out of mothballs for a side story where he must melt the icy defenses of Cate Blanchett's suspicious Parisian museum curator - an amusing but underdeveloped gender-inversion of the familiar seducer-spy trope.

The rest of the cast is expertly-arranged but mostly underused: Bill Murray and John Goodman - national treasures unto themselves, at this point - mostly seem to have been commissioned on the assumption that they'll be funny and engaging simply by occupying the screen. It almost works, too. More perplexing is Bob Balaban as the team's Designated Grump; whose teacup-Doberman temperament and steely confrontational personality get early focus without much payoff. I think he's supposed to be a Jewish-American champing at the bit to draw Nazi blood ala Basterds' infamous Bear Jew, but it doesn't really come to much beyond Balaban's preexisting scrappy persona.

By no means is any of this "bad," just consistently beneath its own ambitions. Sequences that should crackle, like Balaban and Murray playing verbal mind games opposite a Nazi officer whose cozy farmhouse is perhaps a little too ostentatiously decorated, play out like glib sitcom fair. Would-be weighty extra beats - will Damon and Blanchett hook up in spite of his conspicuous wedding ring? Will Clooney find the ONE specific sculpture his buddy died trying to save? - feel overly mechanical.

The Monuments Men, the real ones, were an extraordinary story that deserves to have been told more often and more widely than they have been. This will be the first most have heard of them, and as introductions go it's perfectly adequate. But it's hard to ignore that they, and audiences, still probably deserved more.