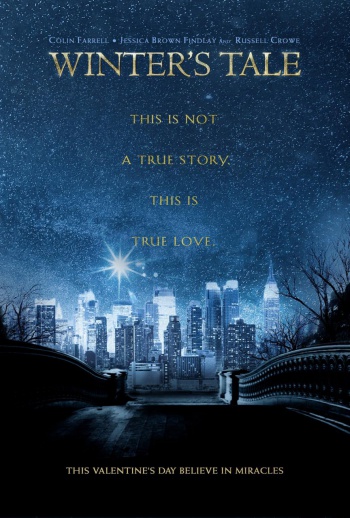 See, with his memories restored, Peter catches a glimpse of Cancer Girl wearing a red head-towel and realizes that it's been her - not Beverly - who he's been destined to perform a miracle on this whole time. He summons Magic Horse (oh, hey! I just realized I forgot to mention that Peter trusts Magic Horse completely because his Wise Inuit Friend told him that it's his "Spirit Animal Guide") and they fly off on Light Energy Wings to the somehow still-standing Snow White Greenhouse...

But Pearly and his gang (I'm not 100% sure if they're also supposed to be demons) arrive to stop them. Fortunately, Magic Horse uses a ground-type attack (It's super effective!) to kill the foot-soldiers so Peter can have a Final Battle with Soames, cutting his throat with the "City of Justice" plaque (From the boat, remember?) which causes him to turn into snow because at this point why the hell not? This time, Snow White Greenhouse works and Cancer Girl is saved. Thus finally permitting Peter and Magic Horse to fly off into the sky and become a constellation with Beverly and virtually guaranteeing a few hundred thousand guys will end their Valentine's Day evenings hearing the phrase "I'm soooooo sorry I made us go see that!"

...the things I go through for you people.

I don't necessarily know that this kind of magical-realist fairytale storytelling is impossible to make work, but Winter's Tale makes a compelling argument against it ever working this way. Grounding supernatural happenings in something like reality can make for an interesting aesthetic (think City of Angels) but the film can't make up its mind whether to be sneaky or literal from beat to beat: Soames using jewels and gold like tea-leaves is a nice (if obvious) greed-as-dark-magic metaphor, but conjuring 3D light-maps of Manhattan by doing so just looks goofy in an otherwise authentic-looking period drama. Will Smith, all joking aside, is actually a great casting for Lucifer given his legendary charisma; and the film nods subtly to his supernatural stature via era-inappropriate clothing (a modern graphic-tee conspicuously peeks out from under his turn of the century dinner jacket) and time-displaced speech idioms... only to spoil it by having him also cast monster-shaped shadows and sprout Todd MacFarlane fangs when he's angry. The effect is like Tom Hiddleston's Loki showing up in the middle of The Dark Knight Rises - same genre, but the tones don't go together.

And yet, I'm still tempted to hope that people turn out to see this anyway. Not because it's good - it's an abomination! - but because I'm presently convinced that it has the makings of a bad movie "institution" like Flowers in the Attic or Batman & Robin (whose infamous screenwriter, Akiva Goldsman, makes his directing debut with here); pop-culture signposts that can give otherwise perfect strangers something in common over which to connect. And in these increasingly cut-off, niche-driven times, we can always use one more of those:

"Where were you the first time you endured Winter's Tale?"