Who are the robot villains?

It's already known that there are enemy Transformers identified as Decepticons in the film, but not where they came from: Are these Joshua's "replacements?" Remaining post-Megatron Decepticon stragglers? Or something else... 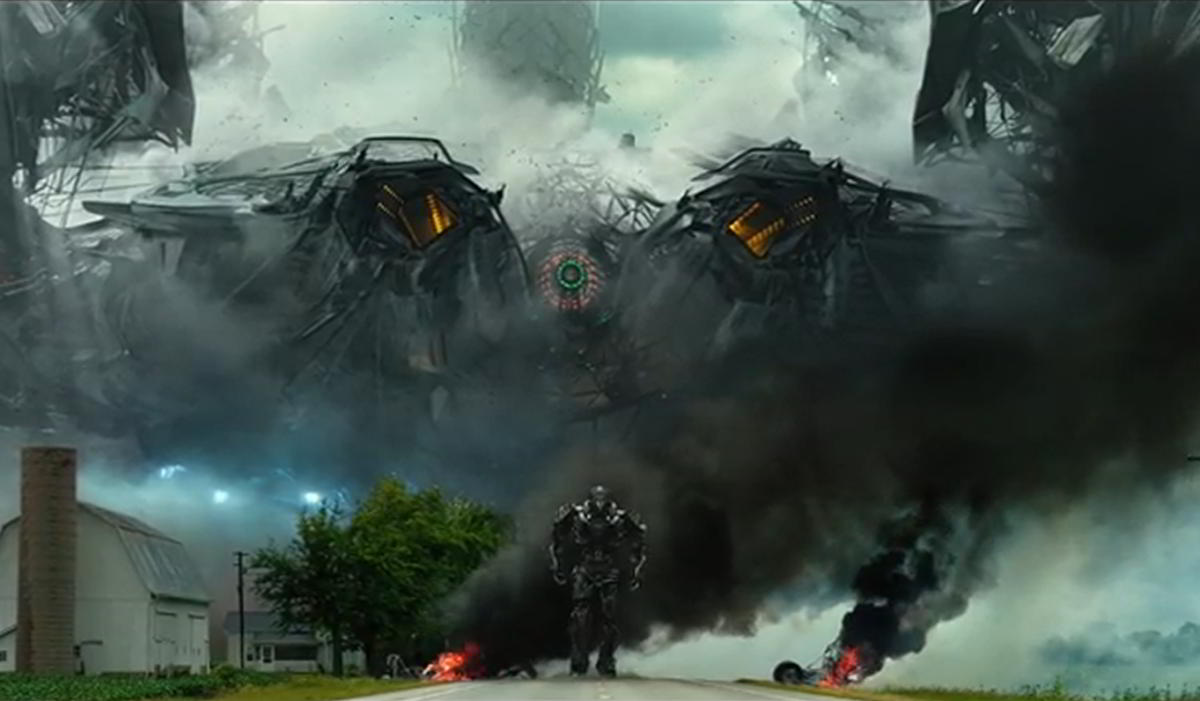 See, Age of Extinction is another high-profile Chinese/American co-production like Iron Man 3, with a portion of the film shot and taking place in China and featuring both established Chinese movie stars (along with newbies picked by a reality TV show - the Transformers movies are enormously popular in China) in prominent roles. One of these is Li Binbing, whose character Su Yueming is cryptically described as "CEO of The Chinese Transformers."

"Chinese Transformers?" Does Joshua outsource his production to Foxconn? Is there a U.S./China arms race for Replacement Transformers? Several of the new Autobots and Decepticons that have been revealed seem to have been designed with Feudal Chinese, Japanese Samurai, Anime Mecha and other Asian-influences obviously in mind - is this why?

Here's what doesn't make sense about that: The reason Hollywood productions like this are shooting/co-producing/casting in China is to help secure favor with the Chinese government's Ministry of Culture, which controls movie distribution in the country. One surefire way to not be in their favor? Make ethnically Chinese characters (or Chinese institutions) the bad guys. Now, The Ministry of Culture really wants to be in the Transformers movie business... but I can't imagine they want it bad enough to let Michael Bay - a filmmaker who has managed to turn the American Flag into his own personal directorial signature (Old Glory appears eight times in the first minute of this trailer) - even slightly "malign" China.

What's the stuff in space?

The trailer features unexplained shots of a fleet (cluster?) of huge machines descending on Earth, and a single large "ship" that appears to be ripping up chunks of cities with a tractor-beam with the gun-faced robot widely assumed to be Galvatron acting as it's herald. 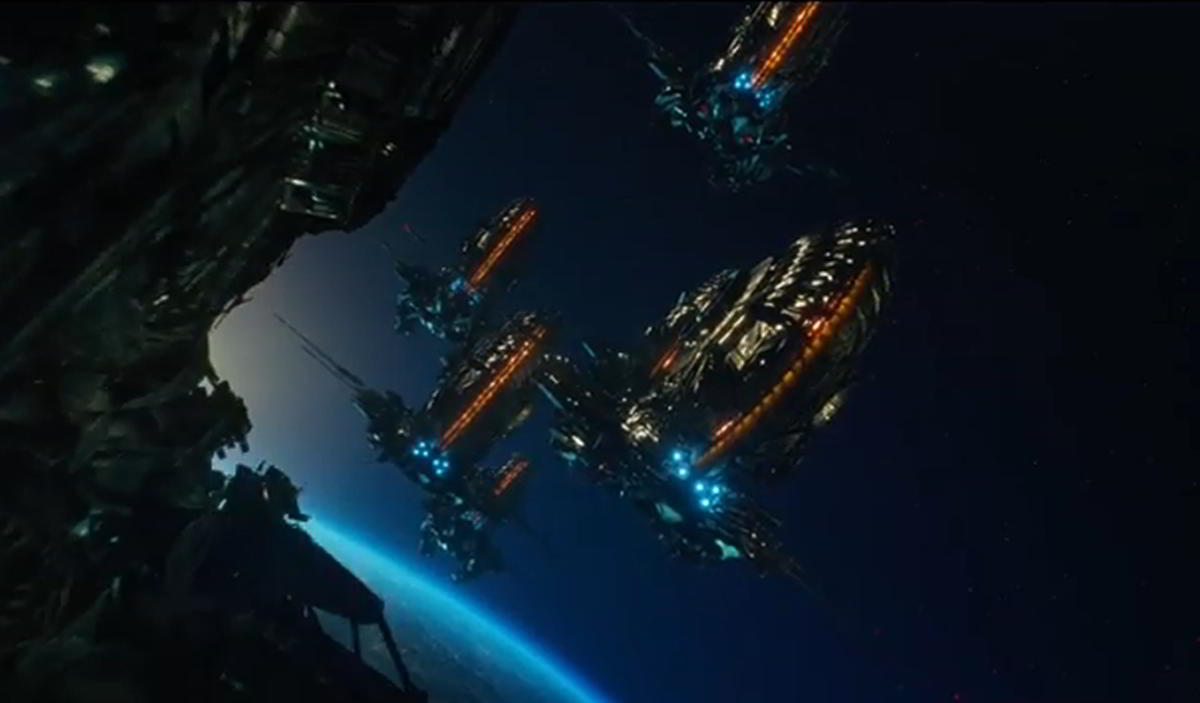 Amusingly, given that special swords appear to be a big part of the story (more on that in a bit), I imagine that fan-speculation would be heavy on this being Scorponok (G1/Headmasters Scorponok was a giant scorpion-shaped warship, I can never decide if he had the stupidest or greatest name ever) had that name not already been appropriated for the random bug Decepticon in the first film.

Obviously, anything massive and from space in a Transformers trailer is going to make fans think of Unicron, which makes sense... but unless all those pieces are eventually going to combine into a humanoid robot the size of a planet that (physically) eats other planets, I kind of hope it's not him.

What's up with the swords?

Optimus Prime now carries a sword, and it's a hand-held weapon as opposed to something onboard like his bladed weapons in the earlier films. Cade Yeager (CADE!!! YEAGER!!!!) has been seen in official promo shots holding what looks like a Transformer-scale sword he's rebuilt into (possibly) a rifle. There are a few important swords in the Transformer mythos, but only two feel relevant: The Star Saber and The Master Sword.

The Star Saber is essentially Cybertron's answer to Excalibur, gifted (usually, Transformers has lots of different timelines) to Prima - the first-built of the original 13 Transformers - by their god Primus (in some continuities, Planet Cybertron is Primus' alt-mode) to defeat Unicron. The Autobot Matrix of Leadership derives from it. I only had to look up one of those things. Somebody please help me. 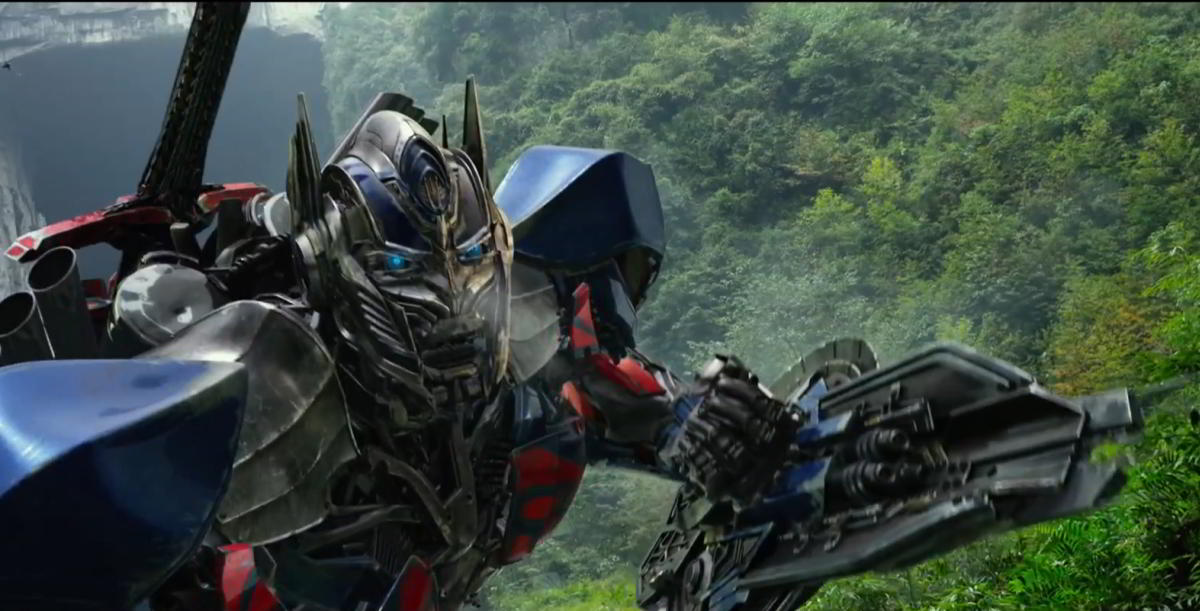 The Master Sword is actually two swords, associated with The Headmasters, Transformers whose heads can detach and transform into smaller-scale robots and who were the focus of the first Japan-only spinoff from the original U.S. animated series. They also featured with a radically-different origin in the series-finale of the U.S. version.)The Master Sword is used as a key to transform the The Autobot Headmasters' warship/headquarters, Fortress Maximus (Scorponok's good opposite, basically), into its giant-humanoid form - where it wields a giant-scale Master Sword of its own.

Who are the Dinobots and where did they come from?

...I got nothin'. Autobots? Decepticons? Joshua's robots? Chinese-built? Not a clue. Usually it goes like this, I imagine that won't be the case here.

All the trailer can offer is that there are Dinobots (which once upon a time were Bay etc's go-to reference for things that were just too bizarre to show up in the movies) and that, if Grimlock is anything to go by, they look even more ridiculous/awesome than you'd expect. What's interesting to me is that it looks like Grimlock's dinosaur-mode, at least, is proportionate in size to Optimus Prime as a regular T-Rex would be to a human... which means he (and presumably the other Dinobots) must be massive - easily the largest individual Transformers in the series so far.

That feels like a very "Michael Bay" approach to robot dinosaurs: "Yeah, those are pretty okay... but can we make `em even BIGGER? Maybe give `em some badass HORNS?? Ooh! Can the flying guy have two heads? Cause that'd be AWESOME!"


Transformers: Age Of Extinction opens in U.S. theaters on June 27, 2014.
Related to:
bob chipmanintermissionmoviebobmovies and tvtrailertransformerstransformers age of extinction
0
Tweet