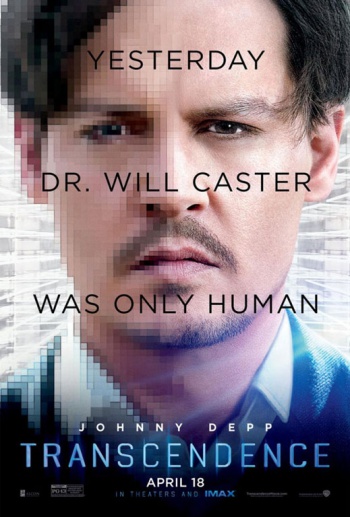 Dumb doesn't even begin to describe this movie. But that doesn't mean we won't try.

The new Johnny Depp film, Transcendence, is a science-fiction film that doesn't seem to like science very much. Or know that much about it. The story concerns a scientist whose brain is transferred into a computer artificial-intelligence program, granting him a frightening level of knowledge and power.

Johnny Depp as a god-like entity is a scary enough prospect, but there's a whole lot of dumb going down on the way there. Here are five of the dumbest.

The film's main conflict (at least at first) is between a team of scientists working to develop a computer with humanlike artificial intelligence and a terrorist group called R.I.F.T.: "Radical Independence From Technology." R.I.F.T thinks that creating true A.I. will be a very bad thing, and because this is that kind of sci-fi movie they turn out to be mostly right. Left unsaid: What they're actually worried about.

The film never bothers to give any of them a concrete rationale for what they're doing other than a computer screencap declaring A.I. to be an "abomination"... which is sort of strange since A.) There are actually a lot of philosophical, economic and demographic arguments made against Singularity-like movements in the real word right now and B.) The film asks us to sympathize with R.I.F.T. (even as they're murdering and kidnapping people) for the most part.

Are you watching a bad science-fiction movie and you want to be able to guess who the bad guy is early on? Just wait for someone to ask one of the scientist characters the "Playing God" question. If said scientist's answer is anything other than an immediate "No!," he's the bad guy. Or he will be, really soon.

Transcendence is one of those movies where something utterly Earth-shaking is happening way out in public but less than a hundred people ever seem to notice.

In this case: A powerful supercomputer with artificial intelligence and the digitized "soul" of a famous researcher is using nanotechnology to control the weather, rewrite the environment and cure human volunteers of their lifelong chronic disabilities - after which they become nano-enhanced superhumans with wifi-enabled brains who use their newfound super strength to help their Computer God build a massive solar energy farm. "He" advertises these services (re: cure all disease, become Superman) virally on the internet... but somehow only seems to draw maybe two or three dozen people, total, and all seemingly from the surrounding area.

Meanwhile, the entire rest of the world does not seem to care that any of this is going on. You'd think other wealthy, powerful nations would show at least a passing interest in this big giant thing happening in the U.S., but nope! No one seems to care outside of R.I.F.T. and some FBI troops.