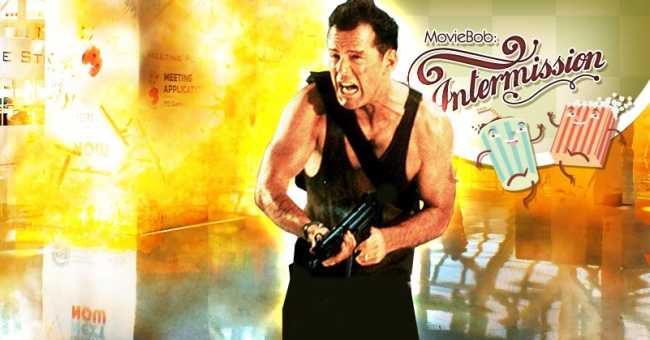 E3 gets the Hollywood treatment.

E3 turns into a bigger and bigger event every year, and next week's show is expected to be no exception. In fact, the show has gotten so big that it's recently managed to attract the attentions of a major Hollywood movie studio!

Sure, the idea of basing a movie around an electronic gaming exhibition may sound strange; but once upon a time we said the same thing about movies based on theme-park rides, building-blocks and seasonal marshmallow treats. Besides, the studio's logic was very sound: E3 is a recognizable franchise with the opportunity to cross-brand with multiple profit-generating IPs!

Which is why it shouldn't surprise you that the studio has already commissioned a screenplay, which - through channels that I'm not at liberty to divulge - I've managed to obtain a rough draft of. Obviously, I'd be putting myself at some substantial risk to just publish the whole thing, but I figured you all might get some amusement out of seeing a few choice pages:

INT. TAXI - DAY
Sgt. Dirk "Lone Wolf" Hardeman, USMC, rides in a cab bound for E3. Recently returned from combat, he aims to reconnect with his estranged ex-wife Tress R. Touwhin, a gaming company publicity manager working the event. She probably left him because she thinks his simple, all-American ways are boring; but we know that Dirk is awesome because he's an army man and that's awesome. He is also the first white person we have seen in the movie, so we know that he is the hero. (Note: unless we can get Will Smith or the Django guy.)

As the cab rounds the corner, we see the huge Convention Center. Hardeman eyes the throng of colorfully-dressed attendees, puzzled. He taps the shoulder of the Cab Driver, a Jamaican man with cartoonishly-elaborate dreadlocks so that we know he's Jamaican. (Note: Or maybe some kind of Indian? The main thing is for his accent to be sorta funny.)

DIRK HARDEMAN
What are all those?

We see Cosplayers in strange costumes, many of them are overweight or look like nerd weirdos - not awesome army guys, like Dirk Hardeman. (Note: Put some hot girls around too. Maybe have one of them look really hot, but then she turns around and it's a guy - that's always funny.) Dirk looks confused and vaguely disgusted.

DIRK HARDEMAN
Do they were work here?

CAB DRIVER
Dem? No mon, no! Dey just be dressin' up for
fun! I tawt you be onna dem at first wit yer
Army gear and such. Tawt maybe you was
supposed to be from Call of Duty!

(Note: This is how we will know that Dirk does not know about video games, because he is a real tough man and a cool guy. This is where many jokes will come from.)

CAB DRIVER
Yah mon! Tis a game, where ya fight in de war!

DIRK HARDEMAN
(eyes narrow, serious and grim)
War... is not a game.