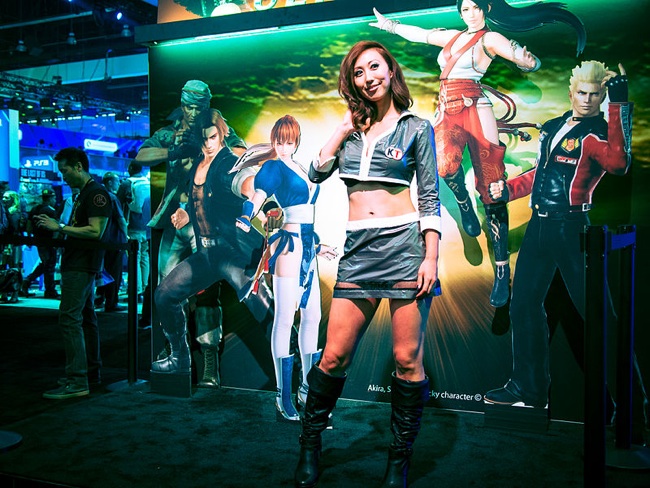 INT. SHOWFLOOR BAR - NIGHT
Dirk has discovered that Tress's job is something called a "booth babe" (note: Do we know this is what they're called? Find that out, because that kind of detail will make or break suspension of disbelief on this thing), which means she has to dress up in a skimpy costume. Dirk told her she did not have to do this, as his army man money can support both of them, but she got crazy and yelled about her independence like a silly woman. So Dirk is drinking a beer, like cool guys do when they are angry, and making small talk with Doug, a young nerd who will become his sidekick. (Note: Can we get "McLovin?" We should get "McLovin.")

DIRK HARDEMAN
So what do you do, Doug?

DOUG
Oh yeah. My team is giving a
presentation for...

Suddenly, there is a HUGE AWESOME GASOLINE-FIRE EXPLOSION in the middle of the show-floor! All the lame exhibition people get thrown around through great big fishtanks that are all over the place for some reason, but Dirk's awesome army skills keep him and Doug safe and out of sight.

A team of terrorists wearing kickass black tactical gear (note: but also those head-cloth things, or else how will we know they're terrorists?) repel down from the rafters and start shooting everybody, but then stop so their leader can take off his mask and talk. He is Willem Dafoe. Or John Malkovich. Or a different actor that people will immediately know is the bad guy.

TERRORIST LEADER
Attention! Video-game glitterati! We are
North Korean Al-Qaedas! We have been
conscripted by the Russians for this mission,
and this building is now under our control!
(beat)
Now, which of you is President of Xbox??

(Note: This can be the Sony one if Sony ends up producing this, right?)

PRESIDENT XBOX
I am the President of Xbox. You
can take me, but let the others go.

DOUG
(whispers)
Tell me about it. Did you know
they tried to mandate The Kinect?

TERRORIST LEADER
The circuit boards for your Box of X
can be converted for missile guidance.
Mother Russia will make use of this...
once you give US the encryptions!

Dirk jumps up like a badass, firing a gun he somehow now has and killing four terrorists allowing the President to escape! Dirk escapes too, because terrorists are bad shots and only manage to destroy several more fish tanks.