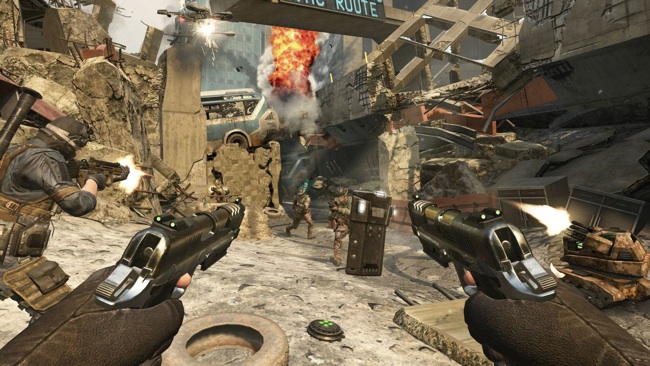 INT. MAIN LOBBY - NIGHT
With Dirk busy having giant gunfights in the upper levels, Doug has led Tress, President Xbox and other hostages to the exit lobby in the shadow of a giant statue of a soldier from the next Call of Duty (note: if Battlefield offers us more for product-placement, would we need a different statue or just the logo?) but Terrorist Henchman #2 appears to block their exit.

DOUG
You guys get outta here.
I'll hold him off!

TRESS
No, Doug! You'll be killed!

DOUG
(smirks)
Nah. Lady, I liberated the
Lylat System when I was twelve!
This guy ain't nothin'!
(serious)
Look... I've respawned a million
times, and it never meant anything.
Dyin' for real... and least I get
to go out for a reason. Go.

Hostages flee as Doug and Henchman #2 trade mid-air dual-wield gunfire. Doug takes many, many bullets to his chest but doesn't immediately die. For some reason, parts of the floor are now on fire.Bleeding out, Doug climbs up the Call of Duty statue as #2 continues to fire. With the last of his strength, Doug pulls a huge metallic ACHIEVEMENT symbol "patch" off the statue's shoulder (note: this is a reference to the game, right? Add more of those, and point them out more obviously) and throws it like a Frisbee DECAPITATING HENCHMAN #2! Doug breathes his last, slumps across the statue's mighty camouflage-clad shoulders.