If Michael Bay is looking for ideas for the next batch of Transformers movies, we've got 'em!

Transformers: Age of Extinction is in my estimation the best of Michael Bay's Transformers movies. That sounds like a backhanded compliment, and I suppose it sort of is, but it's where my opinion is camped right now. It's at least as good as the 1980s animated movie, which is typically thought of as a franchise high-point -- so if "enthusiastically earnest nonsense made up of mashed-together pulp-scifi tropes and accidentally-intriguing ideas wrapped around a commercial for robot toys" is Transformers-speak for "good" then this is the "good" live-action Transformers movie.

It certainly has the most engaging (if cluttered) storyline of the series thus far: Having decided that Transformers are too dangerous to have running around be they Decepticon or Autobot, a CIA-run black ops outfit is hunting and killing them indiscriminately. But while their stated goal is protecting humanity, they're actually running two separate scams: Selling the slaughtered robot's remains to a tech firm with a contract to build human-controlled knock-off Transformers (there's an unforeseen glitch in that scheme, foreshadowed by the Trans-Fakers' leader having been christened "Galvatron") and enlisting backup from a mysterious third faction of Transformers who claim they've been charged with capturing Optimus Prime on behalf of their species "creators."

As ever, this is mainly gibberish that exists to justify the action scenes, but it's of the same vintage that informed the animated series that formed the foundation of the franchise's mythology. Specifically, it recalls the episodes "Day of The Machines," in which human-built sentient robots are hijacked by Megatron, and "Megatron's Master Plan," wherein the Decepticons partner with a crooked politician to smear the Autobots and have them deported. This follows on the heels of the previous film having borrowed a few key plot points from "The Ultimate Doom."

With that in mind, here are seven dubious "classic" storylines from Transformers animated past that could work as big-screen adventures now that someone has worked out the surprisingly difficult algorithm for making $200 million movies out of cheap cartoons from the 80s... 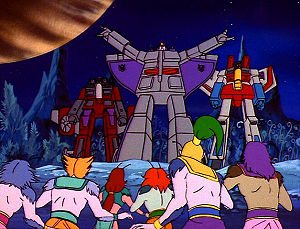 "THE GOD GAMBIT" (Season 2, Episode 26)
The corporate overlords of 80s adver-toons were not particularly concerned with quality control. And while that mostly meant a shoddy product it occasionally meant some eyebrow-raising stuff getting past the radar -- in this case, an introduction to atheism 101.

Some Autobots and Decepticons are fighting it out in space and crash on a primitive alien planet that's in the middle of a sectarian conflict: A group of rebels who "believe in reason and common sense!" are attempting to stage a coup and prove to the citizenry that the "Sky Gods" they've been made to worship and make offerings to are a fabrication of their High Priests used to maintain influence and control. Said Priests try to turn the sudden arrival of giant creatures from the sky to their advantage as evidence in their favor, but get more than they bargained for when AstroTrain, Thrust and Starscream conclude that they'll rather enjoy being not-so-benevolent "gods."

Sure, the last decade or so of science fiction has beaten the old "Chariots of The Gods" riff into the ground, but there's only so many times you can have these guys tear up another human city. Sending the franchise to space makes sense, and since the Transformer species' whole motif is pretending to be what they're not it would make sense that some of them are pulling this shtick somewhere in the universe. 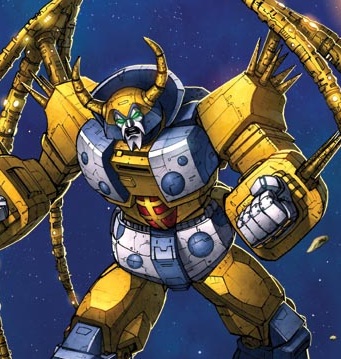 UNICRON (Transformers: The Movie)
Unicron is technically a character, not a story, but the basics of its existence would easily support a feature -- or several features. Introduced as the principal antagonist of the animated Transformers: The Movie, Unicron basically a riff on Marvel Comics' Galactus -- a sentient mechanical planet that travels the cosmos literally devouring entire worlds to power itself, ultimately revealed to be the "alt-mode" of a malevolent planet-sized ancient Transformer. In many versions of the continuity, Unicron is effectively Transformers' version of The Devil and/or embodiment of all cosmic evil, while the Transformer homeworld Cybertron is secretly the "alt-mode" for of Unicron's good counterpart (and Transformer creator-god) Primus. 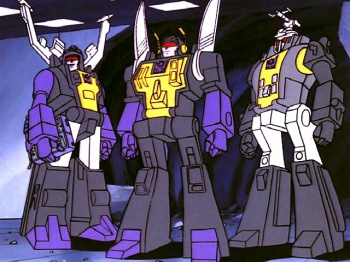 QUEST FOR SURVIVAL (Season 2, Episode 29)
It's odd that the Insecticons (they transform into giant bugs, basically the Decepticon equivalent of the Dinobots) have yet to make it into the movies, unless you want to count the reimagined Scorponok in the first one. Their locust-like behavior, a literalization of the overconsumption = bad moralism of the series, made them among the creepier consistent villains.

In "Quest," the Insecticons often unmentioned secondary ability to copy themselves when they've consumed sufficient energy/matter gets supercharged, and they threaten to spread out over the planet gobbling up all matter while self-replicating at an alarming rate. Transformers versus the "Gray Goo" hypothesis? I'd buy a ticket to that.