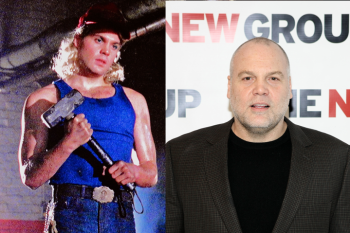 The Marvel Universe has some pretty silly moments in its history, but we'd like to see these make the leap to the big screen.

THOR MEETS THE KINGPIN
Believe it or not, there was a (brief) moment in the 80s when Thor was the talk of the comics world. From (years), writer Walt Simonson had completely redefined the title with an epic, mythology-tinged run that had made Thor more popular than he'd ever been -- so popular, in fact, that the character's ubiquity was mined for a memorable moment in the 80s comedy "classic" Adventures in Babysitting.

In the now-famous scene, the heroes (a teenaged babysitter and her charges on the run from gangsters in the big city) seek help from the night mechanic in a downtown garage, who appears as a musclebound hunk in a blue tank-top with flowing blonde hair clutching a big iron hammer. The youngest daughter of the team, previously established as a devoted fan of Thor comics, mistakes him for the real thing and entreats him to help (he doesn't want to, at first) by offering up her Thor helmet. "Getting" the reference, he agrees -- but says she can keep the helmet because "I've already got one at home."

The actor playing "Thor?" None other than Vincent D'Onofrio -- yup, there was a moment there when the future Detective Goren was looking to reinvent himself as a stud, likely to avoid the typecasting that followed his "Private Pyle" turn in Full Metal Jacket. D'Onofrio's next big role? He's Wilson Fisk, "The Kingpin," in Marvel's Daredevil series for Netflix. (How amazing is that casting? Seriously. I loved Michael Clarke Duncan in the part, but he was a little too "friendly." This is perfect.)

And since it's not uncommon for The Avengers to cross paths with organized crime, how great would it be for the two Thors to run into each other, even just for a moment? Especially if Kingpin could casually ask Chris Hemsworth where his helmet is... 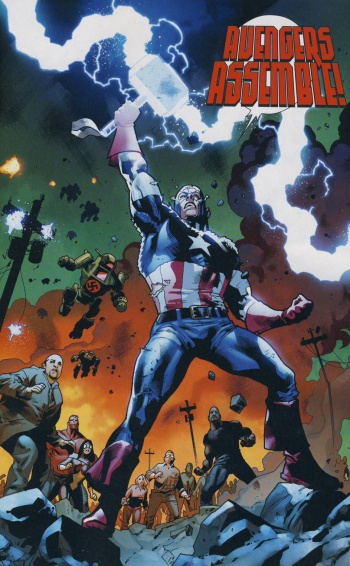 CAPTAIN AMERICA LIFTS MJOLNIR
Quick digression: A small thing for fans new to the Marvel Universe's "quirks" from the movies to get used to sooner than later: Captain America is basically Jesus Christ. He always does the right thing, it's always for the right reason and he's always fighting on the right side. Should he ever do the wrong thing or fight on the wrong side, it will almost always turn out to have not been his fault -- and it won't matter because he'll gladly sacrifice life and limb to correct his failings.

He's effectively perfect -- The American Dream embodied in a time-unstuck human to give every other hero an ideal to strive for. Asgardian warriors measure their courage against his WWII exploits. Wolverine defers his leadership. When he died (he got better, because comics) in Civil War, The Punisher made it his personal business to smash up a white-supremacist group for co-opting Cap's image. (The Punisher! A mass-murdering psychopath who respects no law but his own!)

So of course, Captain America can lift Thor's hammer.

It hasn't really been explicitly stated for the movies, but the enchantment on Mjolnir isn't just that Thor needs to stay on the straight and narrow to wield it. Anyone who is "worthy" by the godly standards of Odin can pick it up -- it's just that almost no one but Thor actually is. The list is small: Beta Ray Bill, Thunderstrike and a handful of robots and Asgardian ancients have done it, and it's canon in both universes (certain crossovers are "official") that Superman and Wonder Woman can do it... but Captain America has always been the go-to guy whenever "Mjolnir-lifting" needs to be a big dramatic emotional highlight, especially since the implication is that he could've done it even if he weren't a super-soldier.

I'm fully expecting Cap wielding Mjolnir to be a "moment" in whatever Chris Evans' last Avengers movie turns out to be ("last Avenger standing," hammer in one hand shield in the other, ready to fight to the end against impossible odds...) but what'd be fun would be to introduce his ability to do so as a moment of levity. Like... if The Avengers all take off for a mission and Steve, without even thinking, politely picks up Mjolnir to hand it off to a departing Thor ("Hey pal, don't forget your...") only to suddenly realize everyone including The Asgardian are staring at him, dumbstruck, wondering how the hell he just did that.