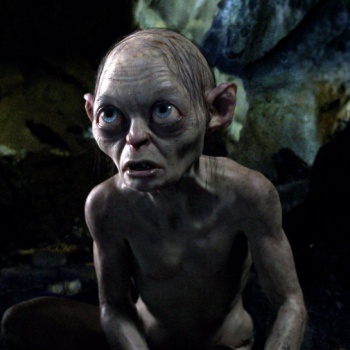 At issue, as laid out in this CartoonBrew summary from a few months back, is Serkis' recent habit of using the term "digital makeup" when describing his process in regards to the animators who build the characters around his captured image and data. More than a few in the animation industry have taken offense to the terminology, feeling that it diminishes the roles that they play in crafting the characters motion-capture actors portray.

On that same CartoonBrew story, the LotR Trilogy's Director of Animation, Randall William Cook dropped in to the comments section to opine that -- while he has nothing but praise for Serkis -- the "digital makeup" analogy just isn't appropriate. In his lengthy explanation, Cook outlines the ways in which major parts of Serkis' performance as Gollum were tweaked and enhanced beyond the original "raw" motion-capture: Expanding/altering facial expressions, changing body position, switching up the placement of limbs within a scene, etc. While he allows for the hypothetical possibility that the technology being used a decade later on the Apes films may be advanced and thus requiring far less extra input from animators, his overall point is fairly blunt: Gollum, at least, was not the sole product of his actor's performance.

The cleanest of Hollywood's dirty secrets (in terms of visibility) when it comes to awards and accolades is that almost everyone is receiving solo credit for fundamentally collaborative work -- and everyone knows it. Only the most oblivious of "Best Actors" truly think they still would've won had their director not given them the right input, or had the editor not plucked just the right takes, or had the cinematographer not properly emphasized them in the frame. A composer could write the most gorgeous musical score of his career, but if it's only going to underscore the events of Garfield 3 chances are it won't be noticed. Hell, the Best Screenplay awards are occasionally regarded as an "inside joke" by those actually on the inside, who know how common it is for the "contractually credited writer" to be someone who A.) didn't write the original script and B.) probably had their re-write re-written by several other people before it got to the shooting phase.

This is the game, and everyone knows it -- that's (one reason) why everyone's Oscar Speech inevitably descends into a litany of thank-yous: You take the award, you acknowledge that everyone has help getting there, you let the rest of the room know that you don't think you were the one key piece to puzzle... even if you actually do think you are. Bottom line: You never, ever say that you did it all yourself and you definitely never say anything that sounds like you're minimizing someone else's contribution. Even if you sincerely believe everyone would've still been bowled-over by your performance regardless of which hat wardrobe put on you that day, when it comes up you smile and say "Oh yeah! That blue hat -- it just wouldn't have worked without the blue hat."

The reason that system of mutual-humility works is that it's built to maintain the industry's lopsided sense of balance: Big stars who hold up the tent being gracious to the "little people" who keep them standing because they need the tent. What makes the situation between Serkis and the various animators taking public and private exception to his description of how their work-relationship functions unique and thorny is that it's a uncommon case of two chronically-overlooked disciplines -- two of the "little people" -- scrapping for credit.