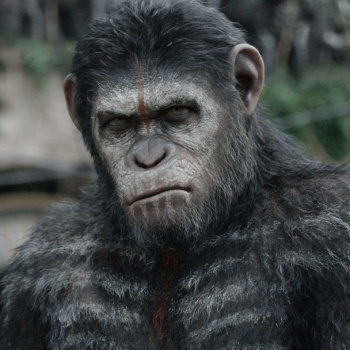 On Serkis' side, motion-capture acting -- the discipline that's turned him from one more mugging character-actor into a bona-fide movie star (one considered the de-facto "king" of a particular style, even) -- is a new and not well-understood process in an industry that fears change and obsolescence above all else. Some established actors look down on it, some new actors see it as a threat to breaking in (why take a risk on new young talent when established superstars can start CGI-ing themselves into twentysomething bodies?), and still more see fewer jobs overall if, say, a single mo-capped performance can be copy-pasted into an army. Those who have these fears would want to see the "merits" of what Serkis and others do diminished, and "The animators helped, so it's not all your work" is a handy way to do it. So one can see why he'd be touchy on the subject, and looking for any chance to assert the primacy of his contribution.

Meanwhile, CGI animators have been the industry's beleaguered whipping-boy for decades now: Creating the FX spectacles that wow audiences and bring the filmmakers immaginations to life... but also absorbing the blame for how "soulless" and "weightless" the blockbuster scene has become, and not even getting much love from the effects fandom community, which has always preferred the oldschool "toymaker's workshop" feel of practical effects to animators and their armies of workstations. They've been getting it from both sides forever, and now that creations like Gollum and Caesar are getting proper attention the credit is all going to go to the actor?

Having seen Dawn, I feel comfortable in saying that Caesar (and several other main ape characters) feel like something on an entirely other level than other animated creatures -- the sense of a human sentience under the pixels is undeniable. But I also have to conclude that it feels equally undeniable that the humanity being able to show through must owe a lot to the animators working out the subtle differences between Serkis' actual physiology and Caesar's.

Case in point: Two of the film's most important shots involve tight close-ups on Caesar's eyes; and while I've no doubt that Serkis' own expressive gaze was the key point of reference... the human iris is difficult to photograph, much less motion-capture. And while one can appreciate Serkis' (or any actor in the same situation) wanting to emphasize that what they're doing is real acting, I have to say he could probably stand to take greater care that he's not unfairly (even if unintentionally) downplaying his collaborators' work in the process.

Beyond that, I don't know if a solution to this exists outside of creating a special category for technologically-assisted performance at The Oscars etc, and even that would likely be regarded as "ghettoizing" the nominated performances and would still likely be handed off to the actor and maybe a credited supervisor -- leaving the in-the-trenches animators overlooked again.

But the question is fascinating: Much has been made of our potential move into a "post-human" world where technology and biology begin to become indistinguishable, but it looks like the entertainment industry is going to get there first. What happens if, when the technology exists, actors begin using things like gene-manipulation on cybernetics to augment themselves for certain roles?

We also picture our Brave New World scenarios coming to a head with grand conundrums about rights or personhood... but chances are before all that we'll be fighting over whether a singer can win a Grammy if they've had auto-tune implanted directly into their vocal chords, or if someone deserves a Best Actor Oscar for "The Bill Clinton Story" after having his DNA re-written with that of the actual Bill Clinton.

What a time to be alive.