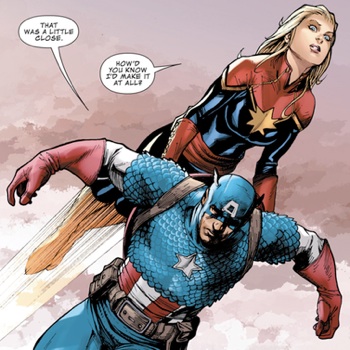 So not only would it not surprise me if they've already got their actress, it wouldn't surprise me at all if they've already picked an actress. I'd call it a good bet that if they have she turns up as part of Age of Ultron -- especially since, if my guess that half or more of The Avengers will be "on the outs" at the end of that film, it'd make sense to have high-power characters like her on-hand to step in and fill the void. Imagine, for example, if the entire "old" team all fled for whatever reason and whoever is in charge post-S.H.I.E.L.D. designates Ms. Marvel, Vision, Quicksilver and Scarlet Witch as the "new" Avengers?

As to the name: I know Carol Danvers is now "Captain" Marvel in the comics and that's a cool development. But I just can't picture Marvel/Disney A.) Running two concurrent franchises in the same genre (and same continuity!) with "Captain" as the first word in the title, nor B.) not taking the chance to wring maximum visibility and credit out of her being their first solo female franchise by keeping her gender in the title -- the "Ms" is the next best thing to calling it: Of Course Marvel Thinks Girls Can Be Superheroes -- The Movie.

5-B. MS. MARVEL HAS ALREADY BEEN CAST, AND SHE'S IN GUARDIANS OF THE GALAXY
Guardians of the Galaxy is being described as Marvel's riskiest film because it doesn't have any strong direct connections to the other, more established characters. Thus far, its only known link to the Avengers cycle is via Thanos and The Collector, and even they're only connected to the other movies through post-credits bonus scenes.

And while Marvel is apparently committed to letting Guardians opening weekend stand on its own merits (both for practical reasons and as a test of just how much of a hitmaker their brand-name really is) let's face it: If it came with one of Marvel's signature post-credits bonus scenes that featured an explicit tie-in between the events of that film and the broader Marvel Universe or even Avengers 2, it'd help with sustaining the box-office re: people deciding they can't wait-and-see after all.

One possibility? Well, in case you're not 100% familiar, Ms. Marvel's comic backstory involves her being an Air Force pilot who absorbed a blast of energy by being too close to a battle involving the original Captain Marvel, a Kree alien. A simplified-for-the-movies version of that would likely just leave Mar-Vell (his real name) out of the equation. And since Kree aliens and their shenanigans are a big part of Guardians, I don't think it'd be a big reach for a post-credits this or that MacGuffin-ish piece of the film's plot winding up on Earth... and Carol Danvers being onhand to find it. 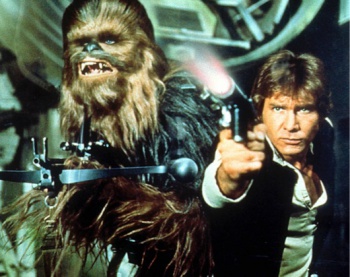 6. HAN SOLO WILL DIE IN STAR WARS: EPISODE VII
Right now, my read of Star Wars: Episode VII (incidentally: pretty sure bet we learn the full title at SDCC, right?) is that they're making a feature-length Original Trilogy fan-film. JJ Abrams' best talent as a director thus-demonstrated is imitating old styles, they're reportedly planning on using models and practical effects to a much greater degree than almost any other recent blockbuster (possibly to make it look even more like the OT?) and Luke, Leia and Han are coming back for one more bow. Bottom line: They want the prevailing reaction from the first teaser all the way to opening day to be that not only is Star Wars "good again," but that it's good in exactly the way the originals were. If there's something Disney can do to this movie to get one more Gen-X movie critic to collapse into the nostalgia-version of a food coma, they're gonna do it.

BUT! They also have to know that you can't build the entire action-heavy movie -- to say nothing of an entire new trilogy -- on the adventures of a trio of 60-70 year-old actors. Instead, one imagines they'll probably each get a "big moment" or two in the first film before largely passing the torch to the new, younger leads: Leia will grab a gun and blast a bunch of guys, reminding everyone what made her so groundbreaking as a "princess" heroine in the original. Luke will bust out his lightsaber and be Boss Jedi one more time. But Han? Well...

Harrison Ford wanted Han Solo to die in Return of The Jedi, that's a well-known part of Star Wars production lore. Whoever the new villains are, we're going to need a reason to A.) hate them and B.) consider them at least symbolically a threat similar to that of Vader or The Sith (assuming it's not simply just "More Sith"). What would accomplish that handily? Have the new baddies kill one of the original three leads. And since it can't be Luke (too obvious) or Leia (you can't kill one of what often seems like the only women in the galaxy), so Han is the obvious choice.

It'd be a big moment, it'd catch people off guard, it'd make things "personal" for longtime Star Wars fans without having to contrive an unlikely connection between the new threat and Vader etc; and it would give Harrison Ford the freedom from being asked about sequels to movies he made a lifetime ago he seems to desire more than life itself.