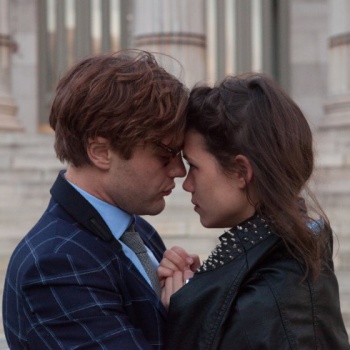 I sat down to talk with Mike Cahill and Michael Pitt of I Origins to get to the bottom of this sci-fi flick.

Warning: This piece features spoilers (which are also in the trailer) for the film I Origins.

I Origins is another low-key sci-fi entry (not quite "mumblecore," definitely "arthouse" and hipster top-to-bottom) from Mike Cahill (director of the rather compelling Another Earth, which I liked a lot) starring Michael Pitt in the role of Ian Gray, a soulful dweeb hero (there's really no other kind in these movies...) who doesn't believe in souls. A brilliant evolutionary biologist, he and his lab-assistant/platonic work-wife (Britt Marling) are experts on eyeballs: Their big project? Inducing blind worms to develop eyes in order to knock down the so-called "Irreducible Complexity" of the human eye as point often cited by Creationists to argument in favor of an Intelligent Designer. He's refreshingly direct about his aims, too: He (Pitt) wants to be the scientist who gets to toss the next big shovelful of dirt onto Religion's coffin.

His other big project? An ongoing whirlwind romance with Astrid Berges-Frisby as "Sofi," a -- stop me if you've heard this one -- quirky, wild, colorful, artistic, childlike-yet-sexually-adventurous, wide-eyed, eternally-optimistic, high on life human dynamo who yanks him out of his stuffy shell like a magical soul-masseur while asking seemingly nothing of substance in return and having next to no discernible past, goal, direction, want or barest semblance of an interior life of her own. Yeah, it's one of those.

Sofi isn't exactly a fan of Ian's work ("This is what you do all day? Torture worms?") nor of his philosophy (or lack thereof): "Why are you trying to disprove God??" she asks, accusingly. Not that she's some kind of Holy Roller, mind you -- a specific religious point of view would lessen the Millennial-appeal of her New Age whirligig persona. Instead she just sort of flits and twirls about while droning in a silky lilt about karma, destiny, etc; moping that Ian can't also surrender to the bliss of not knowing (or caring) how things actually work. If Sofi (or the film) does have a point, it's basically "Hey kids, cool news! Turns out there IS an Intelligent Designer predestining and ordering everything -- but don't worry! It's not the boring judgmental churchy version your parents were into! Naw, it's one of those cool trendy Eastern ones white hipsters can appropriate to mean whatever they want it too!"

Not that having an intellectually-bankrupt (or just stupid) theme/message/story makes a film bad -- I gave Lucy (the movie built around the dumb "humans only use 10% of their brain" pop-myth) a mostly positive review for being fun and (ironically) refreshingly optimistic and progressive, after all. But even if you strip out what amounts to Hipster Orientalist Creationism, I Origins would still be insufferably "twee" and pretentious about "big idea" mystery the inevitable answer to which is A.) trite and B.) immediately obvious.

Anyway, Sofi dies in a freak accident halfway into the movie. That's probably supposed to be a spoiler, but it's in the trailer so... whatever. A few years later, Ian and Marling's character are married with child when they discover that someone has worked out a way to use their revolutionary eye-mapping research to find evidence of identical iris-patterns as part of a bid to document proof of reincarnation -- and, wouldn't you know it? -- some unknown person in India may have just tested positive for Sofi Reborn. Gee, I wonder if Ian will find "closure" in the form of accepting that his science really is powerless next to... um... whatever it was his dead girlfriend vaguely believed in?

So... yeah, not a fan of the movie. But when offered the chance to sit and interview Cahill and Pitt about it, I sort-of jumped at the chance: It's pretty rare that I find myself loathing a movie so completely that I actually want to dig further into it and get a chance to talk to its makers. Hell -- maybe they'll convince me that I'm wrong? (Spoiler warning: they did not convince me that I was wrong -- though credit where due, Cahill was a really good sport when I pretended my first question was "What did the ending mean in Another Earth?")