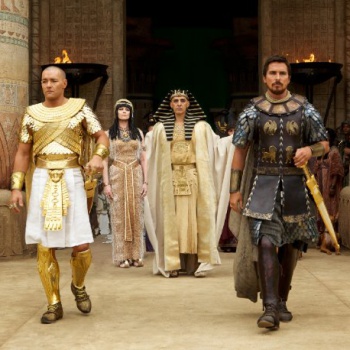 Largely a trade economy with a thriving seaport and (at varying points) international-expansions, it's likely that Egypt's "ancient" period (roughly 6000 BC to Alexander the Great's conquest in 330 BC) was more ethnically diverse in makeup than other areas are thought to have been in the same period -- and that's even before one takes into account the number of times the area was conquered and/or usurped by foreign powers who opted to integrate into traditional Egyptian political and social structures rather than replace them outright. What colored/painted artistic representations of survive of the period seem depict a multitude of skin hues, but others argue that these are meant to be taken as symbolic/aesthetic uses of color (like the neon hair on ostensibly Japanese characters in anime) and not representations of actual pigment.

Oh, we can narrow it down a lot: It's not likely that they resembled the peoples of China or Japan, for example, just on the basis of geography. It's also not likely that the average Egyptian looked much like Christian Bale -- though, technically, he's not actually playing an Egyptian in Exodus. But otherwise, it seems as possible for the persons who originally settled the area (believed to have occurred in the Neolithic period) to have been dark-skinned peoples from further south in Africa as it does for them to have been Semitic-looking peoples hailing from what we'd now call the broader Mideast.

And we definitely don't know what the ethnic makeup of the place would've been during the heavily traveled (by foreigners and locals) period depicted in Exodus. Which, incidentally, is almost entirely conjecture to begin with: What are today thought of as the canonical texts of early Judaism were consolidated mainly from oral tradition centuries after most of the events described are believed to have occurred (or said to have occurred) and while Egypt is known to have had Semitic peoples among their slave populations and it's possible that an exiled or escaped group of the same could have been the ancestors of the people who emerged as the Israelites in Canaan many generations later... there is no archaeological evidence yet uncovered to say which period a historical Moses or even a historical Exodus would have existed in (the film is working from the best known 20th Century "guestimate" version, which posits Moses as the adopted brother of Ramses II).

(And before you ask, no, the question of whether or not there was a "historical Moses," period, isn't really germane to this particular view of the subject.)

So, then. Am I "offended" by a mostly European-looking cast in a film set in ancient Egypt? Not exactly, no. If it's true, as some have alleged, that the film depicts a multi-ethnic Egypt where African-descended citizens are only depicted in servant roles, though? That's another matter. But as it stands I'd put my reaction somewhere closer to disappointed: We've seen this vision of this particular ancient culture before, and since a more "diverse" Ancient Egypt is at least more likely, it might be nice for Richard Pryor to not still be the the only black Pharaoh.

On the other hand, what is troubling is that the film seems all too willing to use racial/ethnic "coding" to delineate the good guys from the bad guys even with a largely white cast: In the trailer, Joel Edgerton and Sigourney Weaver (playing Egyptian royals) appear to be sporting tans, "exotic" eyeliner and more ostensibly Egyptian-looking attire; while Christian Bale's Moses just looks like Bale always does when he grows a beard, and is seen in less exotic-looking "general old-time" armor and dress.

So, Good Guys = familiar = white, Bad Guys = other = "something else." Or at least that's what it looks like. If that extends to the whole of the film, that will be a real shame -- and all the more reason to try something different next time.