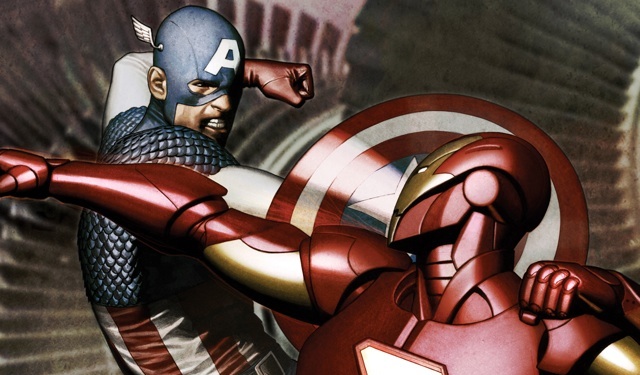 With Marvel's Civil War storyline making the jump to the movies, things are about to get interesting in the cinematic universe.

So, the bad guy (or, at least, the principal-antagonist) of Captain America 3 is... IRON MAN. And the film is either based-on, titled-after or both... Marvel's Civil War storyline.

Well... okay. It's as "big" a deal as it can be, under the circumstances. It's both a feature and a bug of the Marvel Cinematic Universe that things can only get just so heavy, regardless of the circumstances. These are films based on adventure stories aimed alternately at 7-year-olds or nostalgic thirty-somethings that embrace that aspect of themselves more often than not, and as a result "stakes" are really kind of in flux. Yeah, Captain America: The Winter Soldier revealed that the U.S. military and intelligence services had been infiltrated for decades by what is effectively a Neo-Nazi paramilitary cult... but it's not like some endemic/systemic rot in the American machine itself was to blame. It was mostly the schemes of a dead Nazi super-scientist's brain living on inside a computer.

And besides, even if HYDRA had made their big evil plan work initially, eventually a curveball from one of the multiple gods, alien super-beings, etc, floating around out there would've changed the game a bit. Hell, pretty soon Doctor Strange will be running about, and if things get really bad that guy can just rewrite the time-space continuum to put things back in order. Point is, Civil War coming to the screen is as big a deal as can be in a universe where an alien invasion of Manhattan is just "that thing that happened that one time."

Mainly, it's because bringing even the barest outline of Civil War (i.e. "Captain America and Iron Man are enemies now") to the screen is not only a type of story that the Marvel Cinematic Universe hasn't tackled yet, it's a signal that Marvel's grand cinematic experiment intends to keep diving deeper into the intricate eccentricities of their source material.

See, while Marvel Comics didn't invent the idea of superheroes fighting each other, they were the publisher that made it into a brand. Marvel heroes are tiered (or teamed) off from one another by varying levels of societal acceptance and legal alignment (a product of their mainly coming to be in the social-tumult of the 1960s). So it's not unusual to see (for example) upstanding, publicly-beloved, law-enforcement friendly figures like The Avengers bumping up against The X-Men, whose activities often skate significantly close to the edge of legality. Or for S.H.I.E.L.D., a government-backed military-espionage agency, going after ostensibly-"heroic" rogue elements like Punisher or The Hulk. Or for everyone to get into it with Spider-Man, because the universe just can't cut that guy a break. Sure, Marvel heroes tend to have their "arch-enemies," but they spend just as much time fighting each other.