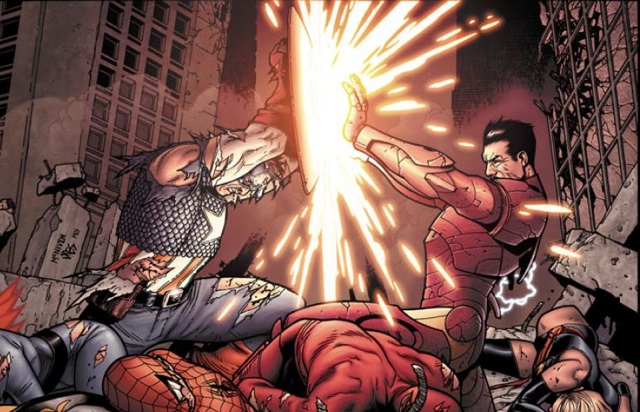 But thus far, the Marvel Studios movies have avoided that sort of thing, save for a few brief Loki-triggered misunderstandings in The Avengers. Mostly because a lot of the alignment-troubled heroes at the heart of these kinds of dust-ups like Spidey, the various mutants, and The Fantastic Four (the only heroes more publicly-beloved than The Avengers) are currently occupied at other studios. So Civil War as the plot of Captain America 3 is really one of quickest available ways for them to get there with the roster they've got now.

But what is Civil War?

Civil War was a universe-spanning Marvel Comics crossover event beginning in 2006 that stretched across seven issues of a main storyline, several side-story books and the corresponding series of almost every character involved in the conflict. The Short Version? It was an attempt to inject some thoughtfulness into the notoriously light-on-substance "all-out superpowered brawl" genre of event comics by expanding the "publicly-liked superhumans vs. publicly-disliked superhumans" format of X-Men to everybody.

The Long Version: It's basically a superhero story about post-Columbine gun/media/culture-angst, at least as the jumping-off point for a hero-vs-hero battlefest. A group of obscure teenaged heroes get into a fight with some villains that gets out of hand, causing a massive explosion that destroys part of a small town and a school full of children. An outraged public drives Congress to pass a Superhero Registration Act, whereby individuals with super-powers (doesn't matter if you were born with them or got them later) would have to register themselves like "human weapons" with the government, and anyone who wanted to use theirs for crime-fighting would have to obtain a federal license to do so... and reveal their secret identities (if applicable) to the public.

Some heroes (mostly older, socially-established ones like Iron Man, the Fantastic Four, multiple Avengers) grudgingly got on board with the idea for one reason or another, with Tony Stark and S.H.I.E.L.D.'s Maria Hill as the nominal "Pro-Registration" leaders. Mostly younger and more "renegade" heroes resisted the idea, and found "Anti-Registration" leadership in the seemingly-unlikely person of Captain America, who believed that superheroes should remain independent actors in order to act as a "check" on military/government/etc. corruption. This was a big deal, because in the comics Iron Man and Captain America aren't just teammates, they're practically life partners -- best friends with a years-long history.

This was a big, big event at the time -- probably the first comics-crossover to take full advantage of what was only starting to be called "social media." Fans were encouraged to tag their forum posts and MySpace/Facebook pages with graphics indicating whether they were "with" Tony Stark or Steve Rogers. The overall story became a bit clumsy (superhero-crossovers are inherently goofy, so maybe not the best place to stage an allegorical civil liberties debate) but the ramifications were felt for years. Spider-Man pledged Team Stark, revealed his identity to the public, realized he'd been on the "wrong" side and had to go on the lam... which saw Aunt May rendered comatose by an assassin's bullet to kick off the much-hated One More Day storyline. The Fantastic Four broke up (Sue took the kids and left Reed along with Johnny, The Thing quit America for France).