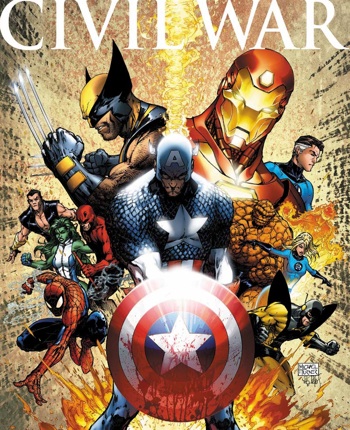 But the biggest one: Captain America's team was "winning" the last major battle of the war... until he realized that the average citizens of the Marvel Universe were against him because of the damage all the fighting was causing. So he gave up and turned himself in -- only to be assassinated (he got better) on his way to court one month later, leaving Bucky Barnes (aka The Winter Soldier) to take over as the new Cap.

Obviously, most of that won't (can't, really) play out in a Cinematic Universe version of this story... but that's not what's interesting. What's interesting (for now) is where it fits in with the various rumors and theories that have swirled about the future of the Marvel movies.

The biggest rumors/speculations of a post-Avengers: Age of Ultron continuity go like this: AoU probably has a "sad" ending (It's the second movie in a big genre franchise, so think "Han in Carbonite"). Chris Evans plans to move out of leading-man roles to directing once his contract as Captain America is up. Avengers 3 might feature a new team of heroes in order to "save" Evans, Downey and Hemsworth's last (contracted) Marvel roles for a hypothetical post-3 "mega-crossover" that wouldn't merely unite Avengers but the entirety of whatever makes up The Marvel Cinematic Universe at that point.

That last one is the most pertinent, in my opinion: Maybe that type of event (still not "confirmed," to be clear) could've been in the cards all along, but the game did change this summer. The "biggest thing" Marvel could do is no longer pay off Thanos or simply re-assemble The Avengers, it's having the rest of the Marvel Universe meet the new megastars on the block -- the Guardians of the Galaxy. (Let's be clear on this point: The only image Marvel could put on-screen that would rival the first "assembled" shot from Avengers in terms of audience "tear the roof off" reaction would be The Milano landing on Avengers Tower.)

Thinking on it for myself, I imagine it's entirely possible that Age of Ultron could end not only badly, but badly in a way that somehow divides The Avengers (and their various friends from their solo films) into differing "I'm with Steve"/"I'm with Tony" teams. Maybe those teams are the factions in Captain America 3's "Civil War," and whichever side comes out on top is the "new" team in Avengers 3 -- with both teams (and everyone else, since "Phase 3" is mainly new characters' launch-films) putting things aside to "come together" over whatever the next big issue is, either in Avengers 4 or the theoretical "mega-event."

Either way, it seems like things will be getting very interesting.