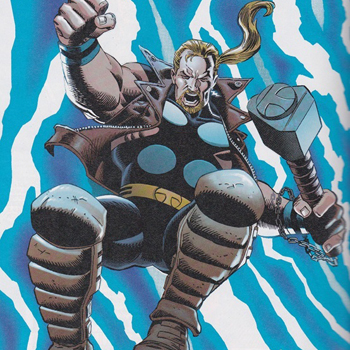 THUNDERSTRIKE
Okay, quick version: At one point, comics were selling so well in the U.S. that Marvel (and also DC, but mostly Marvel) got into the habit of creating characters who were basically duplicates of other co-existing characters just so they could publish slightly different extra books. The most successful of these (relatively speaking) was Thunderstrike, aka Erik Masterson.

Masterson started out as a mortal who found himself able to wield Mjolnir and "become" the new Thor as during a period when they original was sidelined by a brief case of being dead. When Thor-proper came back, Masterson was giving an enchanted Asgardian weapon of his own (a mace, so that's pretty cool) and became "Thunderstrike," an angrier, more "street-level" version of Thor. He's been dead for a few years (I think), but he has a strong fanbase and I can easily imagine a version of this idea creeping into the movies - especially since Chris Hemsworth has made it pretty clear he's not planning to stay in "Thor shape" forever.