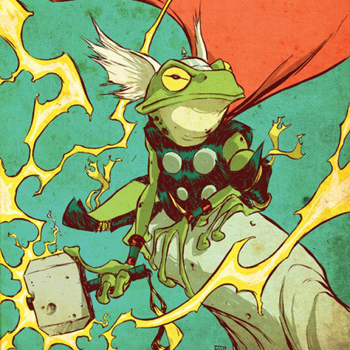 THROG
I promise you, this is not a joke.

At one point during Simonson's Thor run, Asgard etc was left in disarray after Ragnarok broke out over NYC (it worked out okay) and some politicking needed to be done over who was going to be in charge of things. To keep the tensions ticking, Thor had to be kept away from the proceedings, so the book segued into a lighter, "fun" side-story for a few issues after Loki tricked Thor and transformed him into a common frog.

In the course of getting back to his hammer (and to Asgard,) "Frog Thor" made friends with a "regular" frog named Puddlegulp and his tribe of frogs from Central Park, and became involved in a war between them and an invading tribe of rats. Thor helped defeat the rats, then regained his power - sort of: after "trolling" comics fans with a fantasy-animal story, Simonson teased the return of "real" Thor... only to have Mjolnir transform him into a human-sized frog (he got his powers and armor back, though) in need of further magical assistance.

Many years later, it was revealed that Puddlegulp was himself a human transformed into a frog long before Thor showed up; and that when Thor departed he (Puddlegulp) came into possession of a broken-off piece of Mjolnir. This piece transformed him into a (still frog-sized) amphibian Thor named Throg, who subsequently became a member of The Pet Avengers.