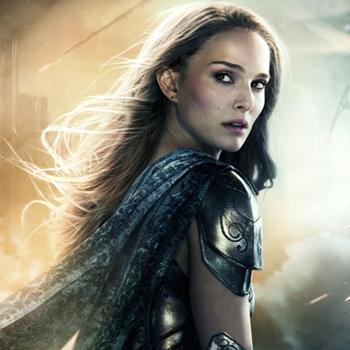 JANE FOSTER
Alright, this one might be cheating since it took place in an alternate "What If?" Universe (Earth-788 to be exact) but since that universe is effectively identical to the mainstream Marvel Universe (Earth-616) apart from this one distinguishing detail I'm counting it.

So yeah, in an alternate-timeline, it was Jane Foster who discovered Mjolnir instead of her boyfriend Donald Blake, and thus she became a female Thor named "Thordis." The story in the comic took some bizarre turns: Odin wasn't initially keen on Thor being a g-g-girl, so he went to his Odinsleep fretting over having only Loki as an heir while Thordis was on Earth having Thor-esque adventures with The Avengers while Lady Sif fell in love with still-human Donald Blake. Eventually they helped save Asgard from destruction by the villain Mangog and, in what was advertised as a "shocking ending," Odin decreed that Thordis turn Mjolnir over to Blake (so that he could become a "proper" Thor) and then rewards Jane Foster for her service by making her an Asgardian Goddess. Then he proposes to her.

That's probably not going to happen. But with Chris Hemsworth having only two more Avengers appearances and one more Thor in his contract, Marvel being famous for not bending to talent's demands easily, Natalie Portman not having found a lead-franchise of her own (assuming she wants one) and a female Thor currently reigning in the comics universe... well, stranger things have happened.