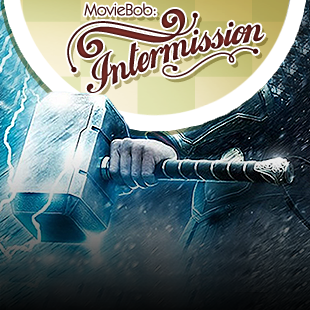 In which Bob nails down the various Marvel characters deemed worthy to wield Mjolnir.

So, did you see that Avengers: Age of Ultron scene? Pretty fun, yeah - and also gets us one step closer to a visual I've been waiting to see since the Marvel Cinematic Universe experiment first launched: Captain America wielding Mjolnir, the hammer of Thor.

In the scene, The Avengers pass the time at what looks like an informal house party with a game of "can anyone else lift the hammer?" In case you'd forgotten: Mjolnir carries an enchantment from Odin that prevents anyone who is not "worthy" of Thor's godly powers from so much as picking it up - including Thor himself, should he act a fool again. Iron Man can't do it, with or without his rocket-powered gauntlets or backup from War Machine. We've already seen that The Hulk can't do it. But then Captain America takes a turn... and actually seems to budge it. Not much - maybe 1/100,000,000th of an inch - and The Captain doesn't even seem to realize that he did it... but Thor certainly does, and it's enough to wipe the smile right off his face.

A thing that The Marvel Universe quickly figured out about Captain America as a character when they brought him back in the 60s is that a guy wearing an American flag as a uniform who always fights on the side of good really only works if you double-down on how square and goody-two-shoes he is. A quick shortcut for that is having him routinely pass tests reliant strictly on innate goodness (psychic villains looking to hurt a hero via their own dark-side are routinely flummoxed by Cap's lack of one) and in Marvel terms there's no test of worth more righteous than being able to hoist Mjolnir, if only for a moment.

Long story short, I've been hoping that whenever we get to some big "final moment" for the current iteration of the MCU, the cherry on the Sunday will be Captain America using Mjolnir to deliver the final blow to some ultimate threat. At this point, I imagine it'd come during whatever Infinity War is going to be, but who knows? Maybe after setting it up in Age of Ultron it'll be paid off there, too.

BUT! Captain America is not the only character who has been able to do this - others have managed, as well. So who says they also won't get their shot doing so on the big screen? Here's a brief rundown of who else might conceivably be seen wielding Mjolnir. NOTE: that "conceivably" part re: likelihood of happening in a Marvel movie is why Superman and Wonder Woman aren't on the list, even though they both proved able to lift the hammer during events that are still canonical to the Marvel Universe. See also: Conan the Barbarian (really!)