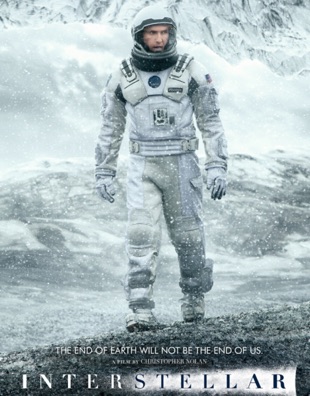 NOTE: Like the title would imply, this is pretty-much one big gigantic SPOILER for Interstellar's story, plot and major twists (and also the plot twists of a handful of much older films). So if you don't want to know, read something else for now - how about this? Or you could watch the SPOILER-FREE review here. Anyway, consider yourself spoiler-warned.

The problem with building a surprise into a story is that, most of the time, if you're playing fair with your audience, you have to leave open the possibility that they're going to figure it out before you want them to. The modern movie twist by which all others are still judged, Bruce Willis's supposed child-therapist in The Sixth Sense being a ghost himself the whole time, should be blindingly obvious to anyone who's ever heard a ghost story before. That it gobsmacked so much of its audience back in 1999 was a testament to a once-promising filmmaker's skill at hiding a reveal in plain sight -- never "cheating" but simply making everything else in the story so tense and interesting that no one's mind ever had a chance to wander and work it out on their own; whereas in a lesser fright-film Cole Seer's (Haley Joel Osment) early admonition that the specters haunting him "Don't know they're dead" would've been cue for the audience to start suspecting everyone in the peripheral cast of being a potential poltergeist.

The exception tends to be when a film is playing around with genre (or genre conventions): Fight Club's absurd third-act switcharound ("We have just lost cabin pressure") is fairly ridiculous when you stop and think about it, but David Fincher spends so much of the film playing around with stylistic gimmickry that it already feels close to a science-fiction (or horror) film well before the insane truth of Tyler Durden's existence finally comes to light.

The big twist to Interstellar (well, the biggest -- technically there are three, but we'll get to that in a moment) is built into the story's inciting incident: Cooper (Matthew McConaughey), a highly-skilled space-pilot turned farmer on a slowly-dying near-future Earth, discovers that his precocious daughter Murphy wasn't just imagining her claims of a "ghost" in her bedroom: Something unseen has been moving objects and dust around into what turn out to be Morse Code messages, which in turn leads Cooper to a top-secret NASA project aiming to send human crews to explore an inexplicably arrived wormhole near Saturn, which they believe may lead to another galaxy where a new home for mankind may be found. And wouldn't you know it: They could really use another highly skilled space pilot. What are the odds, right?

Now, speaking only for myself: I can't quite wrap my head around anyone walking into Interstellar being even tangentially aware that it involves astronauts traveling beyond the barriers of time and space (wormholes, black holes, etc) and reaching this scene without immediately guessing "Oh, so at some point Cooper is going into the black hole, which lets him leap back into his kid's room as either a literal 'ghost' or a hard-scifi explanation for one." Maybe that's me being presumptive as a guy who watches movies and analyzes their structures for a living, granted, but I don't think I'm going to be alone.

The error, in my view, is that we're actually given too much information too early: As a storyteller, Christopher Nolan worships at the altar of exposition (hence why his best film by far, Inception is made up almost-entirely of characters explaining rules, explaining plans, then explaining how the various rules and plans are working or not working as they go through them); but even before he boarded Interstellar it was already a film whose raison d'être was giving hard-science backing (the project was originally conceived by theoretical physicist Kip Thorne) to what feels structurally like a more metaphysical "high pulp" genre work -- a good shorthand description for its aims might be: "Open like Close Encounters, end like 2001: A Space Odyssey, explain how everything actually worked.

In any case, come Act 3, the "workings" (in the actual storyline) have come tragically undone: The supposedly superheroic advance-scout (Matt Damon, in a "Hey look! It's Matt Damon!" surprise cameo) whom Cooper's team has journeyed for decades (thanks to the time-shifting effects of relativity) to rendezvous with turns out to have gone stark-raving mad alone on an alien world, tries to kill them and hijack their ship -- damaging it in the process. Back on Earth, the now-adult Murphy learns that the NASA scientist behind the project (Michael Caine) has been lying to everyone: He gave up his "Plan A" of transporting Earth's human population years ago, and always intended the "Plan B" of Cooper's crew restarting humanity from scratch in the new galaxy as the only plan.

(Oh, and Cooper's other child, Casey Affleck, has turned into a self-righteous "Git offa mah land!!!!" redneck caricature who refuses to let Murphy save his wife and son from the toxic air of their farm; which fails to feel like a completely pointless artificial tension-extender only by virtue of how egregiously Damon's "the audience will be restless if there's no tangible Bad Guy to punch" heel-turn has already sinned in that regard.)