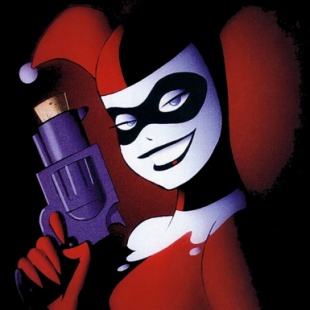 HARLEY QUINN (Margot Robbie)
Originally created for Batman: The Animated Series, Harley Quinn exists in the proud tradition of Barbara Gordon's Batgirl as characters invented for TV adaptations who proved popular enough to become part of the comics. So goes the story, B:TAS creators were worried that TV restrictions would force them to undercut how scary they wanted The Joker to be by forcing him to use amusing clown-themed weapons instead of guns, knives and acid. The solution? Give the slapstick to a regular henchman - or maybe hench-woman... or maybe a girlfriend. Quinn (real name Harlene Quinnzelle, an Arkham psychiatrist who attempted to analyze The Joker) proved to be the breakout original character of the series, and quickly transitioned from sexy comic-relief to a well-rounded vehicle for the writers to explore stories about rehabilitation, the implications of her abusive relationship with Joker and even heavily-implied bisexuality via her "maybe more" friendship with Poison Ivy.