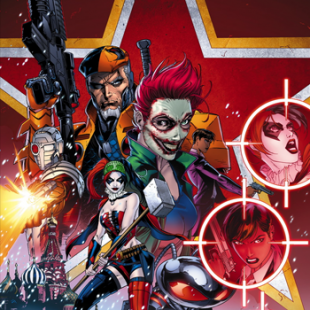 In case you're confused, Bob breaks down Warner Bros. and DC's supervillain supergroup.

Now that there's finally a cast, mainstream movie journalism is finally starting to take notice of the utterly bizarre fact that the very next installment of Warner Bros DC Cinematic Universe movies is going to be a "Dirty Dozen with Comic-Book Villains" from the director of Fury. But what, exactly, is The Suicide Squad?

Well, technically there are two. DC's original Suicide Squad was a WWII-era team (though the stories were written in the 70s) of humans tasked with battling superhuman villains during the period when most of the Justice League/Society were laying low because Joseph McCarthy was targeting metahumans. DC likes to create elaborate answers to questions about why Superman etc didn't intervene during major historical conflicts of the past.

The Squad on the slate now, on the other hand, was created in 1987 by writer John Ostrander. The premise? In part, to answer the question of how costumed supervillains just couldn't seem to stay in jail. The answer? The government parols them in exchange for undertaking high-risk covert-ops missions that officially never take place. That book lasted for 66 issues and is widely celebrated as an innovative high point of DC's sometimes erratic 80s output (ever hear of "Justice League Detroit?") and remains the basis for most modern incarnations of the idea.

As befits the premise, The Suicide Squad of the comics has had a largely rotating membership over the decades; usually made up of obscure B and C-list villains but occasionally incorporating bigger name baddies. The film version is going for a mix of big and small names, both in regards to the characters and the actors portraying them. Read on, and let's take a look at who we've got on the roster...