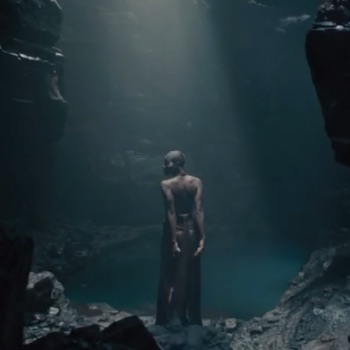 00:33
And here's the big "huh?" from this trailer: What appears to be a black woman with her head shaved disrobing in front of a pool in a cavern. Who is this? No idea, but I don't think it's Jocasta or Drax the Destroyer's daughter Moondragon, two immediately popular but unlikely fan theories.

It's been known/clear for awhile that some preliminary world-building for Black Panther is going to be done in this film and Civil War, so I'm going to go with the consensus on this one and speculate that this woman is part of the Dora Milaje - Black Panther's all-female personal bodyguard team.

00:35
Thor tells Stark that he has been meddling with "Things you don't understand." It's been widely speculated that whatever goes haywire with the film's version of Ultron involves Stark trying to incorporate otherworldly technology into their makeup. If so, what kind? Chitauri leftovers? Loki's scepter? Another Infinity Stone? Something from the now-emptied S.H.I.E.L.D. weapons vaults?

00:38 - 00:41
"We have no place in the world." The editing here is tricksy-looking enough that we could be seeing three different things happening to three different women in three different contexts, but the implication we're meant to draw is that Black Widow is being subjected to some kind of medical torment by an unseen woman.

I'll be digging into this more in depth in the near future, but it looks apparent that we're going to get some backstory on Black Widow in this - the question is how much. In the comics, Widow's origin is INSANELY complicated - she's much older than she appears, has been brainwashed and psychologically-rewired dozens of times, etc. It's only been alluded to so far, but it seems like we'll be finding out she has more in common with the likes of The Winter Soldier sooner or later.

00:54
Andy Serkis, who thus far has had an unexplained/unidentified but very conspicuous cameo in both trailers. In case you'd forgotten, it seems all but certain that he is playing the (still human) arch-enemy of Black Panther, Ulysseys Klaw. So, yeah. If we don't outright visit Wakanda in this movie, we'll certainly be hearing about it.

Just going to throw this out there: I know that everyone just sort of assumes that Hawkeye and Black Widow are more than friends (yes, I saw the necklace in Winter Soldier) but if you look at the first Avengers and the trailers for this sequel, the Avenger she has the most back-and-forth time with is... The Hulk. That's... interesting, is all I'm gonna say for now.

1:02
I wonder if it means anything that "final" Ultron's energy-signature here is red whereas the earlier versions are blue?

1:03
What's happening to Thor here? If there's one thing he shouldn't be vulnerable to, it's lightning. Also: Where is this taking place? Looks Asgardian, or at least medieval - as does the woman in the skimpy Slave Leia-esque getup in the background...

Alright. That's the new trailer business. Fans looking for a deeper (and even more potentially-spoilery) dig into this should keep an eye out for this coming Friday's MovieBob: Intermission, wherein I'll be pooling into some crazy theories of my own.