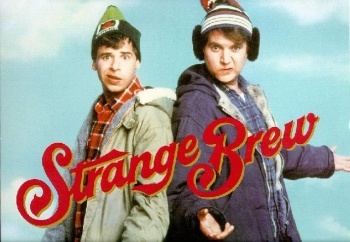 Today, Rick Moranis and Dave Thomas are well-known TV and movie stars with tons of credits to their names. But once upon a time they were neophyte comedians making their name on Second City TV - the same comedy show/troupe that gave us Dan Ackroyd, the late John Candy and others. Thomas and Moranis' signature bit was Doug and Bob McKenzie, a pair of blue collar, beer-loving Canadian brothers who hosted a low-budget TV talk show from their couch (good lord, but how many sketches have used that premise since then?). Originally designed as filler material, the skits became the most popular thing on the show, spawning a bestselling comedy album and this movie.

The story - believe it or not - is a reworking of Hamlet with the McKenzie Bros. as a front-and-center Rosencrantz and Guildenstern: A beer company heiress suspects her deceased father was intentionally usurped by his evil brother, and the brothers - newbie employees at the brewery - get swept up in her quest. The whole thing is part of a nefarious scheme by a supervillain Brewmeister (Max Von Sydow!) who plans to rule the world through mind-control beer. Disgraced hockey stars, haunted arcade machines and superhero dogs also play a part, and the whole thing is just about as ridiculous as it sounds.

I know, I know, but don't let the "middlebrow-indie-your-aunt-loved" sheen put you off this authentically funny buddy comedy that somehow straddles the line between urbane Boomer angst and goofy "guy movie" shenanigans. Paul Giamatti and Thomas Hayden Church are a grousing wine expert and a soon-to-be-married washed up actor on a comical vacation in California Wine Country.

What's great about Sideways is how it takes the outer trappings of a milquetoast Sundance-style sophisticated indie - Southern California setting, respected character actors, banter about obscure wines, male midlife crisis, writer's block, etc. - and drapes them over what's ultimately the skeleton of a Cheech and Chong (or Beavis and Butthead, or Harold and Kumar, or Wayne and Garth) movie about a pair of badly-behaved male buddies getting into trouble on a road trip.

It's that rare movie that can move back and forth effortlessly between moments of high-minded character drama and bawdy slapstick: Scenes of two wounded souls bonding over passionate love of wine or wrenching personal breakdowns share the screen with pratfalls, drunk golfing gross-out gags involving wine-tasting "leftovers."

There's a school of thought that this is still Jackie Chan's best movie after all these years. Once you see it, it's kinda hard to argue that logic even if you're more of a Police Story or Project A fan. Either way, I can't think of anything else that ought take the top spot as the Best Drinking Movie Ever.

You don't really need to have seen Drunken Master I to get into it, or even know that Chan is technically playing a variation on martial arts folk hero Wong Fei-Hung, for that matter. What's important is that he's a bumbling kung fu master who finds himself at odds with the criminal dealings of British interlopers in turn of the century China, and that he utilizes a (highly fictionalized) version of Zui Quan - a.k.a. "Drunken Boxing" - his skill at which increases the more intoxicated he becomes.

The Drunken Boxing setpieces - including a duel against street thieves where Fei Hung's stepmom and her ma-jong buddies toss him ever-more-potent drinks and the jaw-dropping final melee in a steel factory - are still an utter marvel even today, some of the greatest moments from the prime of Chan's career. But the film also makes ample room to showcase its star's range for slapstick and verbal comedy. But, at the end of the day, it's a movie where Jackie Chan gets super powers from getting fall-down drunk! How can you not want to see that?