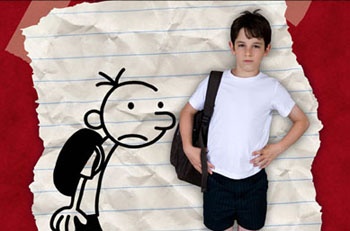 MovieBob: What strikes me as unusual about the books and now the movie is that, usually, when you have a series about young boys it's always on the lines of "boy becomes a man." There's this tradition where if you're not running off to the woods, the Hardy Boys, whatever, but Greg is decidedly NOT "that guy." So how much of this, if any, is a reaction to that sort of material?

Jeff Kinney: I'd say it's a strong reaction. I remember being a third or fourth grader, being out on the soccer field and being more or less a cone for the other kids to dribble around. Our purpose was to make the other kids - the kids who were already stars - look good. I kind of carried that awareness with me through childhood and, y'know, not every kid is a hero or always acts perfectly; and in literature there are plenty of protagonists who don't act like kids, who act like miniature adults. Just from the title alone, I was trying to create a kid who was imperfect - you might be better than him. So yes, it was a reaction to that kind of over-masculinized style of writing.

MB: Even when you have books about kids who aren't athletes, the background to that is "okay, but in compensation for that he's smart or a paragon of virtue." But here, maybe moreso in the movie than in the book because it doesn't have as much inner-monologue, [Greg] has that kind of glorious self-centeredness of a 10 or 11 year-old boy where, yeah, he's the main character, but he can be kind of a jerk.

JK: Yeah. Not to try and put myself in this category, but if you take a character like Holden Caulfield or Tom Sawyer or Huck Finn, those are really flawed characters who probably stirred up stuff in their day about not being a role model. And if my characters were role models nobody would be reading my book. Kids get enough of that kind of pap and I wanted to make sure [Greg] was relatable and felt like a real kid.

(At this point, the broader interview turned to the subject of Kinney's real childhood, it's influence on the books, and PopTropica - Kinney's mega-popular kid's web gaming venture that he describes as a mix of King's Quest and Carl Barks' legendary Disney/Duck comics of the 40s. )

MB: So would you say you were more Greg or more Rowley?

JK: I was definitely Greg.

MB: Videogames actually feature very prominently in the books, and one of my first reactions reading them was "that's awesome!" Because, usually, whenever videogames turn up in kid's literature it's an evil thing. It's keeping them from the outdoors, it's turning them violent, if you're looking for the bad guy in a kid's book it's the guy who plays too many videogames, who all "wired" and corrupted by technology, etc. Was it intentional, at all, to have it in there and make it not a positive or negative just something they do?

JK: Yeah. It was more sort of realistic. I think kids just like to play videogames, if they had their druthers they'd play videogames all day long. That's how I was as a kid, that's how I see a lot of kids are now, so I figured that was the average case.

MB: I have a feeling a lot of parents out there aren't thrilled with you for showing them that game-case trick. [In the book, Greg shows Rowley how to sneak "violent" games past his protective parents by keeping (presumably) M-rated games inside E-rated cases.)

JK: [laughs] Wow, I'd forgotten about that actually. That would be a good trick, wouldn't it?

MB: What do you think of [actor] Steve Zahn, who plays Greg's father? Because he seems - at first - like unconventional casting to be playing a suburban dad.

JK: He really surprised me. He's probably the character who looks the least like the character from the book, but I felt like he could take almost any line even if it was very dry and make it interesting and funny. I met him on the set, spent a few hours with him, and I have to say he's the funniest person I've ever met. Hands down. How he acts in the movie is how he acts in real life. I would kill to have a friend like him.

I think that - in the book - Greg's father is always on him about being a wimpy kid and, once you put that on the screen, it's not gonna work. You're just gonna think "this guy is a jerk." So you need to soften it up, or give a different take to make it work.

MB: He almost seems like he's a little too young, like, you look at him and then you look at how old Rodrick [Greg's teenaged older brother] is in the movie it kind of clicks: "Oh, okay. This is a guy who had kids waaaay earlier than he was ready to." And he's just figuring it out as he goes.

JK: Right. I hope audiences find that that works, because if there's a sequel, he has a big part to play and I'm excited for that.