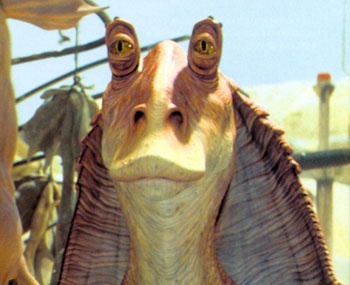 For a lot of us, the answer was relatively simple: grouse about it for a year or so, then go see Fellowship of the Ring and realize that life does, in fact, go on. But for others, going on wasn't an option. Hating George Lucas - it goes well beyond simply dismissing the prequels at this point - has become a full-time obsession for a sizable contingent that seizes upon each new affront perpetrated by the man as though they were gathering evidence for an indictment. "George Lucas raped my childhood" has become a meme used to satirize fanboy overreaction, but it started out as a real thing and the sentiment has only gotten worse the more it's been codified.

And all of that, of course, is absent the fact that bizarre sense of "entitlement" among a lot of these folks is bordering on a kind of pathology. I hate to break it to you, but no matter how much Star Wars stuff you've bought and/or loved over the years, but George Lucas doesn't owe you anything. At all.

The Special Editions are a debacle, and cinema history will judge Lucas harshly for their existence, but if Greedo shooting first "ruined your life" then your life was in a pretty sorry place to begin with. The Prequels are quite awful in their own right, but if they've really ruined your ability to enjoy the originals that's mostly on you. More importantly, whatever "wrongs" Lucas has committed lately simply don't stack up as tremendously noteworthy compared to the remarkable "rights" of his overall career.

Look around you at the state of film - genre film, in particular - from the 80s onward. Look at the blockbuster market of right now. Look at the abundance of film technology, the quality of effects, the advances in sound and projection. It all exists, largely, because of George Lucas.

I don't have to list what he's done. Most of you already know, and if not, the information is more than readily accessible. Technology he invented and championed allowed for huge innovations in the films of others. He helped Steven Spielberg become Steven Spielberg, and between the two of them they fostered and aided dozens of other young filmmakers to bright futures. Industrial Light & Magic exists today because he needed it to, while doing effects work for Lucas productions kept Jim Henson's various enterprises chugging through a lot of uncertain times. Hell, in the broadest sense possible, can you imagine any of the scifi/fantasy properties of the 80s and 90s ever existing without the dual influence of Star Wars and Indiana Jones on the popular culture?

Beyond that, let's certainly not forget his establishment of LucasArts and all that that brought to the gaming world. Monkey Island, anyone? Full Throttle? Grim Fandango? Sam & Max? SCUMM itself? Where would we be without them, and where would they be without him?

Outside of film, TV and game work, there's been very little negative to say of the man: By all accounts a loving father to three adopted children, a mentor and friend to countless established and up-and-coming filmmakers and other professionals, a generous donor to a litany of charitable causes - including Edutopia, aka "The George Lucas Educational Foundation."

At the end of the day, Lucas has made far too many invaluable contributions to the art and technology of filmmaking, and is by all accounts too solid of a guy, to be hated over a late-period run of substandard movies.

Yes, even if he is guilty of Jar-Jar Binks.

Extra Punctuation: Why Exactly Do We Care About Star Wars? Yahtzee Croshaw 65 Comments