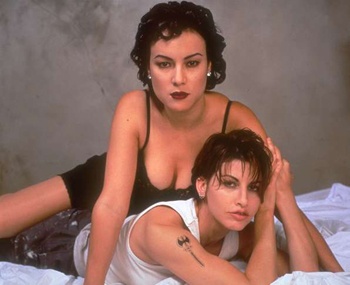 Oh don't gimme that look. Mainly, this is a simple matter of visual mathematics for me: one beautiful actress in a... "situation" is good, two beautiful actresses in a... "situation" together is double good. For me, the history of movie love scenes is the history of perfectly good scenery being ruined by the presence of some guy. The male body repulses me. No, really. All of them, without exception. 300, for me, might as well be two hours of misshapen bipedal yams fighting on a beach. Yegh! In all honesty, when I discovered the concept of female/female romantic relationships around middle school or so (nevermind in what context), I figured that was the end of the line as far as my prospective future with the opposite sex was concerned... If they can be "with" each other now (yes, "now," as far as a sixth grader knew this was a brand new invention) what the hell will they want with us? As if I needed to be more insecure. To this day, I don't really grasp why any woman sleeps with any man, period. So, in that respect, movie lesbians are an ever-compelling visual.

On a more serious note, though, over the years I've found that such coupling - from a story perspective - makes for great improvement in terms of dramatic relatability. Melodrama, especially, works better with two women in my opinion. I can never buy all the poetic histrionics required of melodramatic romance spilling out of male characters (see: Twilight.) Female characters, on the other hand? Call it a gender stereotype if you must, but it just seems to work better. Think how much better Titanic would've been if Leonardo DiCaprio had been played by, I dunno, pick a circa-1997 20s-something actress. Gina Gershon, maybe? And I don't just mean visually.

Metal, from where I stand, is the most innately cinematic of all modern musical genres, if for no other reason than its versatility: driving and rhythmic for action, soaring and operatic for drama, ominous for tension, pounding for suspense. It's also the only genre outside of actual opera where you can use lyrics about things like the eternal battle between darkness and light - which, admittedly, is the subject of a lot of movies - and be completely unironic about it. What's better than a great final battle? A great final battle over the guitar solo from a song about great final battles.

There are certain things that don't look good in real life. Fighting is one of them. In real life, fights are short, messy and chaotic, which makes for dull spectactorship. I have no idea why watching ultimate fighting is supposed to be so interesting - all I ever see is two slabs of beef falling over on the mat for a minute or so. So when it comes to movie fights, realism can take a hike. Give me an epic ballet of implausibly-accurate special moves from the Hong Kong fightmasters over a jittery Jason Bourne slapfight any day.