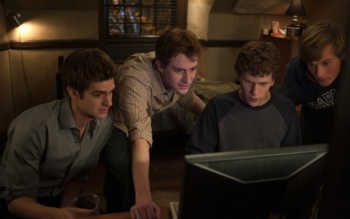 Easily the biggest outrage of this year's roster is Christopher Nolan getting snubbed for a nomination here, despite Inception being damn near the definition of a "director's film." I liked Speech enough to feel a bit bad for the slagging it's going to take as an "undeserved" or "out-of-touch" nominee a la Shakespeare in Love but Tom Hooper doesn't belong on this list this year. The King's Speech is a formulaic, workmanlike film built on a slew of always-reliable British acting powerhouses, not any kind of noteworthy directing accomplishment.

Really, really, really good list, and the also the easiest one to call: Colin Firth, who's been due forever, will win. Second easiest call: Oscar pundits will be near-unanimous in reading it as an apology by The Academy for not recognizing him in A Single Man last year.

Another good list, another rather easy call: Natalie Portman takes it for Black Swan, unless a significant portion of the voters were turned off by the film's explicit sexuality and descent into horror territory, in which case it'll be a good night for longtime industry favorite Bening.
In "honor just to be nominated" terms, the big winner is newcomer Jennifer Lawrence. Bigger winner? The producers of X-Men: First Class, who cast Lawrence as the teenage Mystique and now get to put "Academy Award Nominee" on her credit in the trailer.

Christian Bale in The Fighter, John Hawkes in Winter's Bone, Jeremy Renner in The Town, Mark Ruffalo in The Kids Are All Right, Geoffrey Rush in The King's Speech

Alright. Here is your Oscar. Now please, please think about chilling out a bit, huh? We all really appreciate the intensity, the dedication, the intensity, the physical transformations, the intensity, the genuinely-frightening submission of The Self into The Character almost to the extent of quasi-blank-slate psychopathy - and did we mention the constant intensity? But we'd also like great actors to not burn themselves out before they turn 40. So, yeah. Here's your trophy, congrats. Now maybe think about taking it down a notch once in a while - maybe do a comedy, or a talking-dog movie, or something between the big heavy stuff.

Really good category, really too close to try calling.
Something to take note of, though is the absolutely nonsensical manner in which Oscar decides what constitutes a "supporting" performance. Anyone who's seen Grit can tell you that Hailee Steinfeld wasn't just the lead (hell, only) female character, she was the main character, period. Mattie Ross drives the plot and tells the story. But because she's a newcomer in a film packed with megastars she's "supporting" here. Gimme a break.