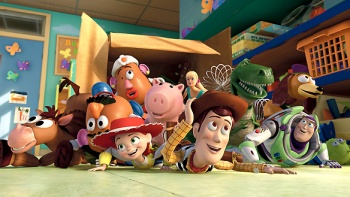 How To Train Your Dragon, Toy Story 3, The Illusionist

Aww, cheer up Everybody Who Isn't Pixar! Their next movie is a Cars sequel, so you'll have a much better shot next year!

Probably Seidler. On the other hand, Hollywood's very strong and vocal pro-gay-equality populace would love the chance to publically laud The Kids Are All Right - ideally with accompanying anti-Prop8 acceptance speech - and this would be just the place to do it.

I have no joke to make here. It's a great list, and Aaron Sorkin will probably win - and he deserves to.

Second most outrageous snub of the year outside of Nolan for Director? Daft Punk shut out of even a nod here for producing one of the best (and certainly the most original) scores of the year for Tron: Legacy. Yes, I know, not everyone liked the movie, but that score was a triumph. Sadder still, fans of the duo are thus denied the fun of explaining to their bewildered family/friends/coworkers why the Power Rangers were sitting in the audience at the Oscars.

Congratulations to makeup FX legend Rick Baker on his eleventh nomination (and six wins!) in the Best Makeup category for his stunning creatures in The Wolf Man. Baker won the first Oscar ever awarded for m akeup FX back in 1981 for An American Werewolf in London.

The lack of love shown to Tron: Legacy extends into its total shutout from the special effects, costuming and art direction categories. Again, whatever you think of the movie overall it's a visual marvel - although it's possible that the not-quite-perfectness of the digitally de-aged Jeff Bridges overshadowed how good the rest of the effects were, to say nothing of the rather incredible costuming.

Zero chance of it, I realize, but it would've been nice and wholly deserved to toss Edgar Wright a directing nod for Scott Pilgrim. No, the movie didn't need to be a Best Picture contender, but its direction in terms of pace, blocking, composition and sheer visual energy is some of the freshest and most engaging of the year.

Speaking of too unlikely to be a snub: It would've been both awesome and deserved for Chloe Moretz to get a nod for Kick-Ass's Hit Girl. I know, I know - it's a controversial role in a divisive movie, but it's every bit the star making breakout role that Steinfeld's turn in Grit was.