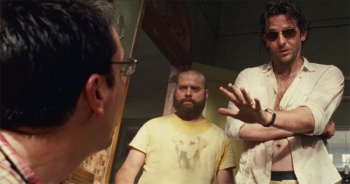 The "What happens..." ads were at a pop cultural zenith when the first Hangover was conceived, and it's no coincidence: It's a movie about the exact sort of men most likely to be targeted/entranced by the slogan finding themselves in a situation where "What happens in Vegas" is most definitely not going to stay there. They aren't simply waking up woozy after a party, they're waking up from a consequence-free fantasy only to be smacked in the face, repeatedly, by a consequence-filled reality.

Importantly, the three main characters of The Hangover (Justin Bartha doesn't count, as he is a plot device in both films) are not especially likable men. Bradley Cooper's Phil is a sleazy, perpetually adolescent horndog - Glen Quagmire made flesh. Ed Helms' Stu is a henpecked twit passive-aggressively "letting" his friends "drag" him into sketchy situations. Zach Galifanakis' Alan is the closest among them to nice, mostly by virtue of being a developmentally stunted manchild who doesn't know any better - and even he is implied to be guilty of some ill-defined indiscretions (he's not allowed near schoolyards). Our heroes, ladies and gentlemen. Their intentions in Vegas are openly exploitative: They're jerks, looking to use the town and its various parts to play-act at being slightly bigger jerks and come out clean.

Also importantly, the key obstacles they find standing between them and their clean-escape are largely icons of Vegas' "harmless" single-serving hedonism fantasy turned to harmful reality by the light of morning. A domesticated pet tiger (a fixture of the Vegas stage scene) nearly mauls them, a walking joke has-been celebrity (Mike Tyson) beats them up and a wacky foreign tourist (Ken Jeong) turns out to be a dangerously unhinged international criminal.

But the most awkward reality check comes from the ultimate symbol of Sin City's usable humanity: The Hooker, whom Stu has accidentally married and given a priceless family heirloom. Getting those two situations fixed would be tough even if she was just a hooker, which is what they assume they're dealing with at first, but the reality is even stickier. She turns out to be a sweetheart - a kindly, good-natured real human being, which is much harder for them to deal with.

The happy hooker subplot is the heart (such as it is) of The Hangover. Live tiger in the bathroom? Comparatively easy to deal with. The person you pay to use for sex is actually a human being with feelings you'd actually rather not hurt, but you kind of have to? That's a tough nut to crack.

In the second one, on the other hand...