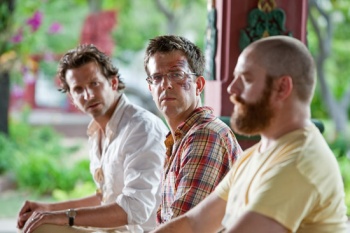 All of the gags in Hangover 2 are deliberate reworkings of similar scenarios from the first, and the new version of "Stu married a hooker" is "Stu had sex with a transsexual hooker." But this time, the dynamic has been inverted in a vastly less interesting direction. "Oh crap, the hooker is actually really nice and we can't just blow her off, take the ring and be done with it" is now "Oh crap, I had sex with a transsexual ... Gross!"

Not only is the gag not especially funny - unless, of course, the sight of an otherwise female-looking person sporting male genitalia is itself inherently hilarious and/or disgusting to you, which is the attitude the movie appears to take - it heads in a dark direction. Stu basically has a nervous breakdown at the revelation, in a manner so profoundly over the top (even compared to the same moment freakout in #1) that it's obviously that the film is setting up the same sort of gag as before ... except it doesn't. There's no turnaround on Stu this time; "Ew, yuck!" is the extent of the gag.

Meanwhile, the other character of interest in the scene more or less ceases to be human (in eyes of the film) the moment her "extra feature" is made apparent - as far as the editing, shot choices and camerawork of the scene is concerned, The Wolfpack may as well be in the company of the Queen Alien. It's a pretty grim inversion. The scene allegedly being one upped from the original was about giving Stu (and the others) a much-deserved slap in the face by humanizing another character; this version is about increasing Stu's standing as a victim of Bangkok's "weirdness" by de-humanizing another character.

It's a trite scene informed by an ugly undercurrent of homo/transphobia, but it's also emblematic of how the rest of the sequel fumbles the ball. Hangover 1 was all about the reality of Vegas beating the snot out of characters who'd approached it through the prism of the Vegas Fantasy. Hangover 2 is, by contrast, about Bangkok - a city largely imagined, not entirely without merit, by the Western world to be something like a less-pleasant Mos Eisley - turning out to be exactly the wretched hive of freaks, crooks and weird/terrifying foreign people they expect it to be.

Expectations being met is not funny.

And neither is Hangover 2.