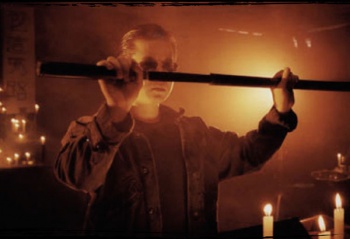 FULL DISCLOSURE: I know the guy who made this, and our work has played some of the same venues together. That said, I was interested in the movie before I met him, and it lived up to what I'd heard about it - namely, that it's a highly imaginative, low-budget indie action/horror piece with a laser sight on jaded genre fans. A hitman dispatched to kill a Chinatown crime boss discovers that his target is actually a centuries-old vampire, and that he is now the target of his minions. It has a lot of the problems that other semi-pro efforts have, namely that it's very much a showcase for the filmmaker's influences (Evil Dead and John Woo shoot-em-ups most heavily, in this case). But the decision to swap out traditional Western vampires with their Chinese mythological counterparts - hence, a whole different set of rules, weaknesses, etc. - is inspired and the homebrew gore FX are suitably charming.

One of John Carpenter's most unfairly overlooked movies features "Rowdy" Roddy Piper in what is easily the best action movie ever to star a professional wrestler. He's an average down-and-out guy who discovers the secret to end all secrets: Earth has been conquered by aliens ... and nobody knew it! See, the invaders are in control of The Media, and are broadcasting a brainwashing signal that makes them look like regular humans to us. Only special sunglasses can reveal the "real" world - and, as a bonus, lets Piper see "through" subliminal advertisements (example: Billboards for cushy consumer goods actually just say "Sleep More!" or "Obey!" in big bold letters.) Notably, South Park's infamous Timmy vs. Jimmy "Cripple Fight" was a deliberate recreation of Piper's epic slugfest with Keith David (yes, the one you're thinking of) from this film; often called one of the best street brawl scenes ever filmed.

Renegade cartoon iconoclast Ralph Bakshi and fantasy art demigod Frank Frazetta teamed up for this animated swords-and-sorcery oddity about a young barbarian trying to save a princess from a wizard's ice fortress. The story, setting and characters are arch to the point of self-parody (right down to the veeeeeery uncomfortable lisping, mama's-boy gay villain) but visually it's kind of breathtaking. Bakshi filmed real actors performing the scenes, then had animators trace and ink their movements onto animation cels by hand frame by frame - a process called rotoscoping. If you're an animator who's been lucky enough to only ever know the digital form of the medium, just watching this should make your wrist ache.

What would a Square/Enix cut scene look like with live actors and what was at the time one of the highest CGI budgets ever attempted in Hong Kong? Like this movie, a remake of an early-80s kung-fu classic from action legend Tsui Hark. I have seen this, all the way through, three times, and I still have no idea what happened. But it looked awesome.