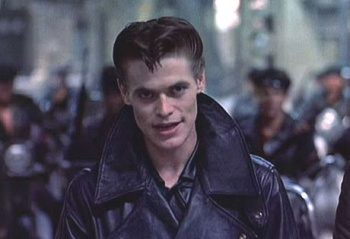 Retro-gamers: Remember that big glut of arcade brawlers that glommed onto the Warriors aesthetic, imagining urban war zones of candy-colored gangs and pop-iconography confetti (Double Dragon, Streets of Rage, you get the idea)? Here's a movie that's sort of working the same angle. The threadbare plot - a soldier has to save his rock star ex-girlfriend from a street gang - plays out in a retro-futuristic downtown where the cars, clothes, music and even architecture of various eras and pop influences inexplicably coexist. Willem Dafoe is a memorable villain.

Paul W.S. Anderson and Len Wiseman are both guilty of making "check out my crazy-hot wife!" movies (can you blame them?) but they've got nothing on John Derek, who cast his then-wife Bo Derek as Jane opposite Miles O'Keefe (from the MST3K classic Cave Dwellers!) as Tarzan in what amounts to a nigh plotless excuse for Bo to run around topless in the jungle. Eye candy aside, this is one of the most astonishingly bad modern movies ever released; though it also features a hilariously go-for-broke turn by the great Richard Harris as Jane's madman father - a Great White Hunter gone native who lives like a cross between Hunter S. Thompson and Colonel Kurtz and at one point engages a trumpeting elephant in an impromptu flute duet.

I've always been a sucker for the tone and feel of American kitsch culture from that brief period of early 60s pop shininess before the 50s had fully transitioned to the 60s. Now, thanks to Mad Men, so are lots of other people, so maybe they'll also enjoy this campy lark best described as Jurassic Park by way of Disneyland. A construction team on a tropical island unwittingly finds and thaws out two dinosaurs (a "good" Brontosaurus - back when it was still called that - and an "evil" T-Rex) and a caveman. Hijinks and family-friendly action ensue.

Uwe Boll finally made a great - not just good, but great - film, and this is it. Scoff if you like, but the first time I saw Rampage it took me hours to process just how such an efficiently made, ingeniously brutal and genuinely frightening film could come from the same guy who gave us the execrable Postal. The story follows - partially in real-time - the execution of a heavily armed killing spree in a small American town by a young "quiet guy next door" psychopath. The idea is to show in chilling detail just how much horror one sufficiently equipped maniac can actually do in a place and time no longer equipped to even anticipate him, much less stop him ... and also how easily pure evil can hide being a mask of "everyday aggravation." Boll (shockingly, given his other work) resists the temptation to either moralize or sensationalize the onscreen action, to the point that it almost plays out like a documentary. It's not an enjoyable film, and I'd especially recommend that anyone who was close to or seriously affected by the recent real life shooting spree in Oslo think twice about clicking "play," but it's a visceral and vital one.