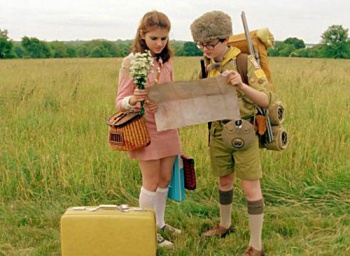 Moonrise Kingdom might just be the most Wes Anderson-y movie Wes Anderson has made yet, with the possible exception of The Fantastic Mr. Fox, which allowed him to render the cast in the same meticulously-handmade fashion he lavishes on everything else. In any case, it's a great film.

I've described Anderson in the past as being Tim Burton with twice the talent but only half the psychological scarring, and I stand by that. He's a filmmaker with a very singular, intensely personal creative voice that can easily be mistaken for self-repetition when seen only from the surface. He likes long takes, meticulously-composed "diorama" shot composition, warm autumnal color tones, handmade/heirloom-esque objects and the gently cheesy artifice of late 60s/early 70s middle class pop-iconography. All of these Wes Anderson tropes and more are on full display here, but it's one new element that takes it to the next level: The main characters are children.

Once you see it, it's kind of amazing that Anderson hasn't made what is very nearly a smarter-than-average slightly-darker version of a kid's story before now. Everything about his aesthetic obsessions, from the dollhouse world unreality to his affection for awkward misfit heroes would seem to make younger leads a natural conclusion. In this case, the setup is a story of first love between two twelve-year-olds on a rural New England island in 1965. The boy, Sam, is an orphaned, emotionally withdrawn "Khaki Scout" (read: Boy Scout). The girl, Suzy, is a too-smart-for-her-own-good bookworm prone to violent outbursts.

Having been secret pen-pals for a year after a chance meeting, Sam and Suzy decide (rather matter-of-factly) that they are in love and opt to run away together - her from her parents (Bill Murray and Francis McDormand) he from his Scout Troop. Problematically, they've elected to do so just as a major hurricane (hey, look! A recurring theme!) is about to slam the island.

Soon enough, the local Sherriff (Bruce Willis) and Sam's earnest Scoutmaster (Edward Norton) have joined the haphazard attempt to find them, which also includes the other members of Sam's Troop - which isn't good news, as Sam isn't particularly popular. Meanwhile, the experience gives the adults cause to air out their own issues and to reconsider their approach to Sam when they meet the alarmingly sinister Social Services matron (Tilda Swinton) who's been dispatched to collect him.

Being 12-year-olds, Sam and Suzy's "plan" is adorably ill-formed. They're basically just sneaking around and camping, Sam aiming to impress with his Scout "survival" skills and Suzy (who occasionally seems like the missing link between Lisa Simpson and Daria Morgandorfer) looking to share her "sophisticated" understanding of Young Adult sci fi/fantasy novels and French pop music. It all sounds very self-consciously quirky - and make no mistake, it is - but in between all the attention Anderson lavishes on the details of what children think of as very important things is a heartbreakingly real depiction of what it feels like to meet someone who seems to understand you, even when you don't fully understand yourself.

Anderson has been criticized (not without merit) for letting his fondness for quirk and artificiality render his films emotionally distant, and while Kingdom is as comfortably unreal as ever (The Boy Scouts, with their kid-sized wilderness gear and grown men enforcing a regimented version of boyhood, is an incredibly natural subject for him) the sincerity of the young leads makes it as close as he's ever come to raw, exposed-nerve humanity - there probably won't be a more affecting "grownup" romance onscreen this year.