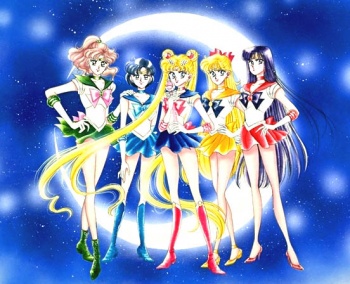 At the very turn of the century (I'm pretty sure this was before 9/11, at least) I was working for a now-defunct DVD/VHS store in a local mall. Of all my retail jobs, this one was probably my favorite. Loved the product, became good friends with my then-managers and coworkers, killer employee discount, etc.

One day, a young family comes in. Mom and dad (late 20s, classic blue-collar Boston-area types) and a son who looked about 7 or 8. Mom and son made a beeline for the Anime section, while dad hung out and looked at the magazines by my checkout counter. This was one of the early peaks of the Toonami-era mainstream Anime Boom, and I headed over to greet them, geared up for the usual routine of carefully explaining that the DVD version of whatever they were about to buy for the kid probably included an uncut-version that was not as kid-friendly as what he'd seen on TV. As it turned out, that would only be half the discussion ...

The series they were there to shop for? Sailor Moon. Mom already knows the "cut vs uncut" deal, and the kid is stoked at how many discs worth we had. Dad, on the other hand, looks (at best) pensive when I get back to the counter.

I know that this either makes me sound like a raging egotist at worst and the protagonist of a cheap Philip Marlowe rip off at best, but I felt like I could read this guy's whole story. This was a guy who'd heard the words, "it's a boy!" and immediately bought up a whole store's worth of kid-sized baseball gloves and football pads, but instead (or, who knows, maybe in addition to) his son's big fixation is a "girl's cartoon." He didn't strike me as a bad guy, I stress. Not so much upset at the circumstances as made unsure by the sense (justified or not) that this might be the beginning of "uncharted waters" for him as a parent. Fair or not, the world can be a tough place for people (children especially) who even appear to step outside "accepted" gender behaviors even in the trivial realm of entertainment choices.

After being called over to take hold of the first set of purchases-to-be and coming back to the counter, Dad turns to me. "You got a lot of that show here, huh? That's good." Then he leans in, gestures for me to do the same, and lowers his voice. You already know what comes next: "Can I ask you somethin', guy-to-guy?"

This can go either way. "Sure."

"This thing is popular, huh?"

I stress, once more, that this in no way struck me as the voice or the face of a guy who was mad that his son was buying "a girl show" or at whatever else he imagined that might entail (or imply.) This was a guy who was worried that he wasn't going to "connect" with his son the way he figured a father should. And, having identified me as someone who might know something helpful about this "this thing" his kid was into, he was reaching out.

Honestly, I sympathized with both of them. And I figured the best I could be was honest.

"Well, more girls, but plenty of boys, too. Probably breaks about 60/40, honestly." I may have embellished the percentages, but the point was totally true. Anime sales tended to cut across traditional gender lines.

I had his attention, figured I might as well sprinkle some sugar on it. Honest sugar, of course, but still sugar. Comfort. Reassurance. "Yeah, I mean... yeah, they're all girls but it's an action show. Lots of fighting, monsters, lasers and stuff."

"Yeah, it is a little intense."

Ah! He watches it with him. Now, it was my turn to lean in and lower my voice. "And, y'know man, honestly... I think a lot of them are just lookin' at the girls."

"Oh, yeah. I mean, look at `em." I flipped over the DVD to the glamour-shots on the back for emphasis. "I mean, if that skirt gets any shorter I'd have to card you for these."

Again, I'm essentially being completely honest here, it's no secret that a percentage of Sailor Moon's male fanbase was gawking at the Sailor Scouts, and while I wouldn't put money on that being the case for his son (he'd be a little young for that, frankly) I couldn't rule it out, either. I mean, I didn't fully understand my appreciation for She-Ra until years later...

"...Yeah." Dad looks at me, for whatever reason, like I'd either just hoisted the weight of the universe off his shoulders; or at least handed him the key to a Decoder Ring. At this point, Mom and Son have wandered over, having heard Dad and I in the midst of a "two knuckleheads from Boston moment" trading broadly-suggestive observations about Sailor Moon.

Mom gives Dad an elbow to the ribs. "What? I can't be happy he's watchin' the girls?" He's laughing now, and looking at the kid like he's picturing some nostalgiac father/son moment to be years from now. "Ya like this, huh?" Kid nods. The DVD stack is about 4 high (good sale, too, if you remember buying Anime in the early-2000s.)
I look to the kid, "Who's your favorite Scout?"

"The brunette." I smirk at Dad. "Somebody likes a challenge." Laying it on a little thick, maybe, but I was in a rhythm at that point and Mom and Dad both laughed. They paid and went on their way, and (I kid you not) I even saw the guy do the classic tussle-the-hair "Dad move" as they left.

I still think about that kid to this day. I hope it all worked out for him. I look back on my retail experience primarily with ambivalence or embarrassment, but this is one of the few times when I feel like I might, however briefly, have done something good.

How Cosplay Can Help You Be Brave Liana Kerzner 9 Comments