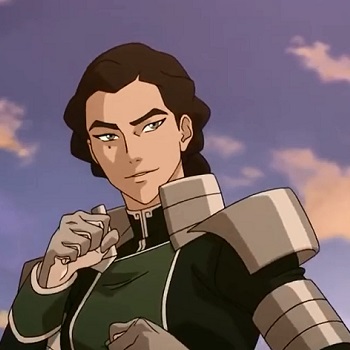 Legend of Korra's Book Four premiere jumps ahead three years without explaining what happened "After All These Years."

Legend of Korra: Book Four takes place three years after the events of Book Three. It's the biggest jump in Legend of Korra -- the first three seasons happen over 18 months -- and this is the most grown-up we've seen "Team Avatar" in Korra or Avatar: The Last Airbender. The season premiere episode, "After All These Years," does a quick survey of the characters to show the audience what everyone is up to, but that's the biggest thing the episode has going for it. After showing off everyone's new outfits and jobs - and introducing the likely antagonist -- it's over.

Perhaps this style of episode would have worked if the new season didn't premiere six weeks after the last season. Don't get me wrong, it's great to jump right back into the show, but maybe all the "I've missed you" and "It's been so long" comments would have actually landed if viewers had some time to miss the characters. As it is, other shows have midseason breaks that make fans wait longer than the break between Book Three and Book Four. Luckily, this is just a fault that likely won't be experienced by later episodes, since starting next episode the season arc should really start rolling and we might get answers to the two big questions the premiere asked: What happened to Korra? What happened to Kuvira?

A lot of the stories in the episode are centered on or connected to Kuvira, one of the young metalbenders from Zaofu in the last season. A character with only a couple lines, she still had an awkward moment in the last episodes where the camera stayed on her for just a bit too long for no reason, highlighting her character and letting us know to remember her. Now she's back and even though the character is older and drastically different, she's still voiced by Zelda Williams (most of the season was completed before the passing of her father, Robin Williams).

Kuvira is cold and hardened and making moves that don't appear to be entirely altruistic, even if she appears to be on the side of the heroes. But with so much of the episode spent establishing that she is shady, it's disappointing that all of her actions seem motivated by childish ambition. It's still too early to really judge the character, but the villains from ATLA and Legend of Korra have often been more intriguing and better motivated than what we are seeing in Kuvira. This is the end of the series and the final antagonist should hopefully be more than someone craving power, especially after Zaheer and the Red Lotus, villains that were legitimately anarchists.

The episode does succeed in making Team Avatar older and different, but still themselves. Now the heroes are in their early twenties and Mako, Bolin, and Asami are working in roles that seem to suit them. Avatar: The Last Airbender did a great job of showing the characters change appearance over time, and the same can be said for this new episode. It's more than just having different hair, too. Their body language and attitudes reflect their growth, and a while it doesn't make the most sense, they are all drawn a little differently to make them look taller, too.

Legend of Korra: Book Four "After All These Years" is available to view on Nick's website. Future episodes will be made available by noon eastern time on Fridays. Spoilers through Book Three and the newest episode follow.