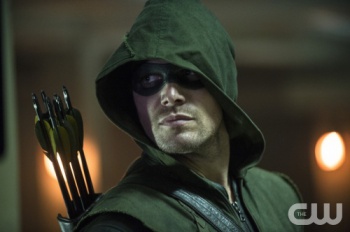 A densely-packed season premiere sees Oliver taking down crime lords and worrying about the danger his crusade brings to his friends.

Arrow season 3 returns to Starling City five months after the events of the season two finale. Thanks to the work of the vigilante and his team, crime in Starling City is at a historic low. Diggle, Felicity, Oliver, and Roy have become an effective team, and "The Calm" opens on them executing a perfect take-down of a shipment of rocket-propelled grenades (RPGs). The man bringing the weapons into Starling City, Vincent Steelgrave, is taken in and quickly prosecuted by a confident and revitalized Laurel Lance. Steelgrave's arrest leaves a gap in the city's underworld that is filled by Werner Zytle, who has taken up the name of Count Vertigo and added a psychotropic hit to his namesake's drug. Vertigo is determined to kill The Arrow.

The end of the second season wrapped up most of Oliver's problems neatly. He defeated Deathstroke and his army without killing, Diggle and Lyla kept Amanda Waller from hitting Starling City with a drone strike, and Sara Lance (Black Canary) seems to have figured out where she belongs, returning with her lover Nyssa Al Ghul to the League of Assassins. Oliver is broke, and, unknown to him, his sister has joined up with the maniacal archer Malcolm Merlyn, but Oliver has become the hero he wanted to be. "The Calm" quickly resolves the cliffhanger at the end of season two that saw Detective Quentin Lance collapse, giving him a promotion and putting him on press conferences as a Captain for the SCPD. At the beginning of the premiere, Oliver asks Felicity on date, Diggle and his ex-wife Lyla are expecting their first child, and Queen Consolidated is on the cusp of being back in Oliver's hands. Things are pretty rosy, but it is all threatened when Count Vertigo targets The Arrow while he's on his date with Felicity. The premiere then packs in as much drama, threat, and complication as possible, ending on a sudden and unexpected character death.

There's so much going on in this premiere that none of the threats, or the victories, feel earned. This episode could have easily been split into three or more individual episodes, which would have given the characters some much needed space to develop. The timeline of events is muddied, with Steelgrave headed off to prison in what seems like mere moments after Oliver brings him in. Count Vertigo's arrival and escalation as a villain is equally sudden. Vertigo manages to take over Steelgrave's gang, attack The Arrow, and establish a pattern of targeting other crime lords in what seems like less than two days. After Oliver's dinner with Felicity is interrupted by an RPG, Oliver is sent back to almost season one levels of insecurity about allowing anyone to be close to him. He becomes convinced that his crusade is too dangerous, leading him to ground Diggle, citing his imminent fatherhood, and souring his relationship with Felicity. Apparently he doesn't feel quite the same about Roy, who Oliver continues to bring out to fight Vertigo. Poor Roy. Roy barely gets any lines in the premiere, but at least what he does get shows that Arsenal, his vigilante alter-ego, is competent and quick on his feet.

Jammed in around the edges of this episode are flashbacks to Oliver's time in Hong Kong and the subplot of Oliver and Felicity trying to regain Queen Consolidated. Flashbacks reveal how Amanda Waller keeps Oliver under her thumb by pressuring his desire to keep innocents safe. In the present day, Oliver's efforts to regain his company (and a steady cash flow) gets its own complication, with new bidder Ray Palmer arriving and completely outdoing him. At the end of the premiere, Oliver has so many problems to deal with that it feels like we're half a season in already.

Arrow airs Wednesday nights at 8/7c on The CW. You can also watch the latest episodes on The CW's website and Hulu. Spoilers ahead, including character death, some speculation foreshadowed by comic book references, and my romantic predictions for Felicity.