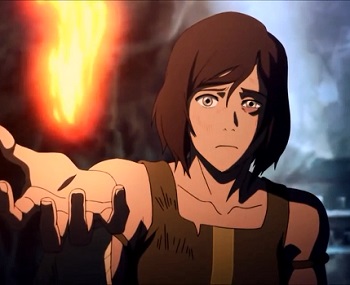 "Korra Alone" poignantly recounts the Avatar's journey and recovery in the three years since Book Three.

The second episode of Book Four of Legend of Korra might be one of the best in the series. Through a series of flashbacks, "Korra Alone" tells the emotional tale of Korra's physical healing and mental fragility over the three years since her battle with Zaheer at the end of Book Three.

Everything in this episode contributes to the touching narrative. The music, visuals, and the call outs to Aang and earlier seasons of LoK all work to support the solo story of Korra's personal, frustrating journey. The script, written by co-creator Michael Dante DiMartino, cohesively blends the old world wisdom of the Avatar universe with the elements of physical therapy viewers would be most familiar with through other media.

The three year gap in seasons also provides the series the opportunity to show just how long that physical therapy can take. The poison the Red Lotus used on Korra and the battle that followed has left Korra in a wheelchair, unable to make use of her legs. Rather than just have Korra appear three years later good as new or show her recover in a short montage, the episode devotes nearly half of its flashback time telling the story. Korra's two years of recovery involved mystical healing through waterbending as well as exercises and emotional guidance.

The episode doesn't drown itself in seriousness, thankfully. The humor fans have come to expect from both series is delivered through the letters Korra receives and people she encounters. These light-hearted moments are crucial, because otherwise the entire episode would be too emotionally draining. Those letters, and a visit from her mentor Tenzin, also work to remind the audience of Kuvira, who is taking charge of stabilizing the Earth Nation.

The letters and brief dialogue Korra has with her friends serve to reinforce both the developing lives of Mako, Bolin, and Asami as well as the relationship between Korra and Asami. The letters between the two are especially caring and supportive, with Korra noting how it is easier for her to share her struggles with Asami. The series seems to give more evidence for Tumblr fans of Legend of Korra to freak out over their most popular non-canon couple.

"Korra Alone" is largely about Korra's internal recovery from past events, going back to Book Two. The episode visits familiar locations and environments from previous season, including the North and South Poles, the Spirit World, deserts, volcanos, and swamps. Korra is looking for answers while haunted by her past, and while the questions still remain, the episode ends with a reveal that any fan of the series will appreciate. Discussion of these elements and events follow, so beware: spoilers follow.