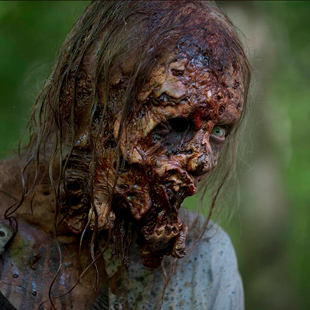 Season 5 of The Walking Dead kicks off with "No Sanctuary", an uncharacteristically good episode that sees our heroes operating with a minimum of plot-required stupidity.

The most annoying horror cliche that, like zombies, refuses to die, is the way the genre depends way too much on characters being incredibly stupid at plot-critical moments. It's even worse when a work of horror does all of that and somehow manages to keep its main characters alive, sending random extras and one-off redshirts to die for the protagonists' sins. Like The Walking Dead, a show that has from the very first episode depended on its characters consistently struggling to adapt to incredibly dangerous situations, getting themselves into incredible peril, while somehow managing to stay alive until an actor's contract runs out (or they lose the "sweeps week" lotto).

But what's this? Was the season 5 premiere actually good? Did we really see our heroes applying lessons from previous experience to the current situation and behaving accordingly? Was there - GASP - a minimum of narrative wheel-spinning and a maximum of incredible carnage? Mostly! What a relief. You know, except for the fact that the world continues to be a post-apocalyptic nightmare. Be thankful for small miracles people, but focus on the big picture, which, in a rare treat for viewers of The Walking Dead, actually seemed to matter.

So let's begin with a quick recap.

When we left the Ricktatorship, they'd just spent the second half of season 4 split into several groups, following a plot-redundant second attack by The Governor during last year's mid-season climax. Enduring some rather violent trials that mainly served to whittle the cast down a bit to make room for new characters, they each made their way to a place called "Terminus". Advertised by signs posted on highways and railroads as a place of safety from the constant dangers of the zombie apocalypse, Terminus seemed to all parties involved like the best bet after the way everything went tits up for them at the abandoned prison they'd previously lived in.

But oops, Terminus was a trap. It turns out that the people living there have organized what amounts to an anarcho-collective, but with crimes against humanity instead of vegan potluck. The Sanctuary group's thing is luring in unsuspecting survivors, imprisoning them, stealing their stuff, and eventually turning them into literal human livestock. As the season 4 finale drew to a close, Rick and most of his band of survivors were relieved of their weapons and locked inside a cattle car to await being eaten. Of course, the Terminus group clearly hasn't been watching The Walking Dead, or they'd know they'd just kidnapped a badass crew of straight up killers cross-trained in multiple forms of murder. Rick even joked about it right before the fade to black (more on that shortly).

Rick Grimes: Still in full tilt Rambo mode after suffering a nervous breakdown following the apparent death of his infant daughter, Rick has largely pulled his shit together enough to make his natural talent for killing people work for the group instead of against it.

Carl Grimes: Rick's tween son, Carl is fast becoming every bit the ruthless killer his father is, only without having had 35+ years of not living in an apocalypse to balance him out. We'll see how well that works out.

Michonne: Still incredibly badass, she has stopped being a quiet loner. Now she's a friendly, group-oriented killer of men and zombies.

Daryl Dixon: Firmly established as Rick's right hand man, Daryl has been coming to terms with his shady past and is firmly committed to his friends.

Maggie Greene and Glenn Rhee: The survivor's resident married couple, they were finally reunited after spending much of season 4 separated.

Sasha: Tyrese's sister, she spent most of season 4 arguing against "hey let's split up" logic and trying to convincine Maggie not to do the stupid thing and set out by herself to find Glenn. It's like the writers were thinking of us!

Tara Chambler: A former a police academy student who fell in with The Governor, she's since joined our heroes and seeks to repent for helping The Governor attack them.

Bob Stookey: Let's be honest: we know next to nothing about this guy. But he's still alive, so let's assume the show plans to do something with him.

Abraham Ford, Rosita Espinosa, and Eugene Porter: Three survivors encountered by Glenn and Tara, they're trying to make their way to Wachington, D.C. where, so Porter claims, he has the key to curing the zombie apocalypse once and for all. Readers of the comic know how this turns out.

Still separated from the group:

NOTE: in the initial draft, I had written a section about the character Lizzie, which was cut for length. In editing, Judith and Lizzie were mingled, resulting in erroneously referring to Rick's daughter as Lizzie. That error has been corrected.

Beth Greene: After the Governor's attack on the prison, Beth traveled with Daryl, until she was randomly kidnapped late in season 4. (Edit: see here for a brief description of what went down the last time we saw her.) Still unaccounted for as of the season 5 premiere.

Tyrese: Devastated after believing his sister killed during The Govenor's attack, Tyrese now travels with Carol, and has become incapable of violence, even in self defense.

Carol Peletier: Having returned after her exile following the discovery that she'd euthanized several people in the prison infected with an unknown disease, Carol is essentially a total badass. She's the only reason Tyrese and Judith are still alive.

Judith Grimes: Rick's infant daughter, Judith was presumed killed after The Governor's attack on the prison, but shocker: Tyrese saved her.

Are we up to speed? Great, let's get into "No Sanctuary".