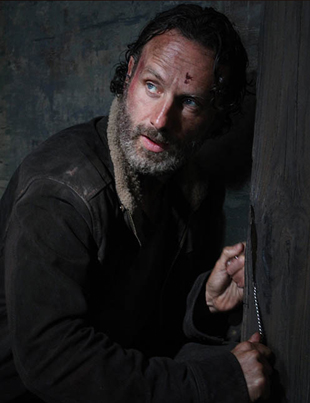 It's fitting that The Walking Dead has a character named Tyrese, because Rick has suddenly started spouting one-liners lifted right out of Vin Diesel's mouth. Think I'm joking? The season 5 premiere sees Rick channelling Riddick and, hopefully, setting up a satisfying - if cheesy - callback joke later in the season. We'll dig into that shortly.

"No Sanctuary" starts with a flashback to some indeterminate time, with a group of people locked in a cattle car, weeping with terror while, just outside, we can hear a woman screaming, presumably being subjected to various unspeakable horrors. It turns out that we're seeing the people who founded Terminus. "We never should have put up the signs," one of the captives says. "What did we think was gonna happen? We brought 'em here!" But there's a twist: at this point, Gareth, established last season as the leader of the Terminus cannibals, emerges from shadow. "We were trying to do something good," he rasps. "We were being human beings."

"What are we now, Gareth?", says the other captive, and we see Gareth's face harden. Cue the flash forward to present day, as we pick up right where we left off last spring. Rick and co. are, we now realize, trapped in the same cattle car, and Rick has just finished dropped the truly great one-liner that closed out season 4 - "they're gonna feel pretty stupid when they find out." "Find out what?" "That they're screwing with the wrong people." - and now they're preparing to fight back as soon as their captors open the cattle car up.

Unfortunately, the Terminus cannibals aren't stupid either. They open the door on the roof of the car and drop a flash grenade down into it. Quickly overcome, Rick, Glenn, Daryl and Bob are dragged into the Terminus complex's abattoir, along with four other random captives. Yes, this is going to be yet another example of TWD using the meaningless deaths of random extras to raise the stakes for our heroes. But this time, the lazy use of redshirt victims serves a dual purpose, establishing how methodical the Terminus cannibals are in how they approach their human cattle operation.

The eight men, gagged and bound, are forcibly bent over a long trough as two Terminus cannibals size them up. In turn, the four unnamed extras are knocked out with aluminum baseball bats, at which point their throats are slit. At this point, Gareth, whose relaxed vibe makes him seem like Dr. Mengele riding a fixie, walks in with a clipboard and grills his fellow cannibals about keeping track of the number of bullets they've used that day. The gist is that whatever else the Terminus cannibals are, they're also well organized and thoughtful about the day to day necessities of resource management in the apocalypse.

After a pointless round of begging by Bob - he thinks these psychos can still be reasoned with; Gareth calmly informs him there's no chance of that - Gareth turns his attention to Rick. Having seen Rick burying a cache of weapons at the end of last season, he offers to spare their lives for a bit longer if Rick will tell him where the cache is and what's contained within. Gareth sounds reasonable and easy going, even as he's threatening to stab out Bob's left eye. This prompts Rick to reveal the contents of the cache, leading to this exchange:

"There's also a Machete with a red handle. That's what I'm going to use to kill you."

Yep. Rick just threatened to kill Gareth with a teacup. More on that later.

But no time to wonder when Rick had the time to come up with these bon mots, because at that moment, an explosion rocks the entire complex, leading to another flashback, this time to just before Rick, Glenn, Daryl and Bob were taken to the abattoir. Now we get to find out what Tyrese, Carol and baby Judith are up to. Walking, by the way. They're still walking around.