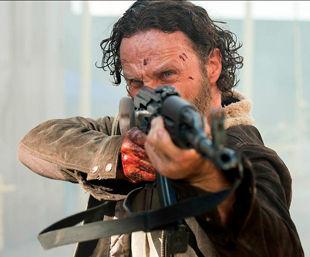 They're also headed to Terminus, but end up taking a detour through the woods in order to evade a large herd of zombies. When one zombie gets too close to them, we learn that Tyrese is still incapable of killing anything. He takes the baby from Carol and asks her to do the honors. Shortly thereafter, they stumble upon a cabin, where one a Terminus cannibal wearing a baseball cap is out on patrol. They overhear him talking on a walkie talkie about killing Carl and Michonne. Oops.

Carol quickly disarms him. "We're friends with the chick with the sword and the kid," she says, clearly having also developed the ability to drop one liners. She and Tyrese force him into the cabin and quickly determine that Terminus is a hellhole, but because the episode hasn't had enough time to explain the theme of the season, they decide to tie him up and leave him alive rather than kill him. Carol then grabs her weapons, leaves the baby and the captive with Tyrese, and after applying some zombie grime to her face to blend in, makes her way to Terminus.

This gives Tyrese and the captive cannibal a chance to exchange extremely hamfisted thematic dialogue. Admitting he no longer has any real connection to humanity, he mocks Tyrese for trying to do the right thing. "You're a good guy," Baseball Cap Cannibal says. "That's why you're gonna die today. That's why the baby's gonna die." Thankfully, even the show's writers seem to have caught on to how insufferable it is to see people fail to get the big picture, because they then put words in the cannibal's mouth that feel like they could have been shouted at the TV by exasperated viewers me. "Why the hell are you even talking to me? Take her, take car, and go. I don't wanna do this today!"

Thank you for speaking for the audience, Baseball Cap Cannibal. Thank you.

Cut back to Carol, who has reached Terminus, where she sees the earlier herd of zombies gathering en masse by the fence. Remember that explosion earlier in the episode? That was her. She coldly shoots up the complex's natural gas tank with her sniper rifle. This blasts open the fence, sets much of the complex on fire and lets the herd of zombies in. Like Rick, she's finally getting that survival means unflinchingly doing what has to be done, no matter how distasteful.

That point is reiterated minutes later by Rick. We cut back to the abattoir, where in the aftermath of the explosion, Gareth runs off to check out what's wrong, leaving the two butchers in charge of guarding the prisoners. Rick, as it turns out, had a makeshift wooden knife in his boot which he uses to cut himself free. He quickly murders both men, then frees his friends. Scoping the scene, Rick and co. notice another cattle car with, presumably, other captives awaiting execution. Rick suggests letting it remain a distraction to aid their escape, but Glenn, who finally gets to do something in the episode, hastily reminds Rick that they need to save those people too. "That's not us," he says, to which Rick grudgingly agrees. Though he also adds some very helpful advice: "Cross any of these people, you kill. Don't hesitate. They wont."

Meanwhile, Tyrese continues to be an idiot, trying to convince Baseball Cap Cannibal that they don't have to murder each other. Around this time, some of that herd of zombies finds their way to the cabin, and while Tyrese is distracted checking the windows, Baseball Cap Cannibal manages to get free and grab baby Judith. Threatening to kill her, he forces Tyrese to leave the cabin, presumably to be devoured alive by zombies. But of course, Rick was right: these guys don't know who they're dealing with. Tyrese finally realizes what kind of world he lives in and makes short work of the zombies, then barges back into the cabin where he delivers a fatal, and richly deserved beating to Baseball Cap Cannibal.

In case the episode's symbolism was too subtle, we get back to Carol, walking methodically through Terminus, having stumbled upon the cannibal's booty room. All meticulously organized, with weapons separated by type, ammo labeled, a large table with hundreds of stolen watches, it's something of a shock that we didn't see "arbeit macht frei" painted on the wall. Carol is then confronted by one of the cannibals, a middle aged woman who, after being shot in the leg, tells Carol the story of how Terminus turned from a legitimate sanctuary to a deathtrap. "You're either the cattle, or the butcher," she says. Carol agrees, leaving her to be devoured by zombies pouring into the room.