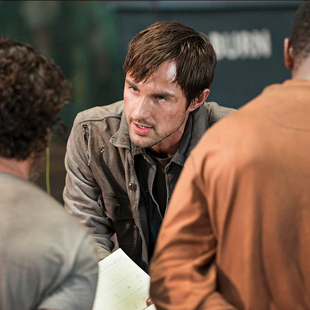 The episode concludes with all of our heroes, save Beth, being reunited. Again. (Seriously, they need to stop using the breaking of the fellowship as a plot device. It's happened too many times to work.) After many months apart, they're all relieved to be together , but more importantly, they've reached the acceptance stage of grief, evidenced by Tyrese, who sadly intones that he killed Baseball Cap Cannibal because he "had to". Hopefully, this means no more pointless time-wasting as they continue not to learn from their experiences.

All in all, it's a better than expected episode from a series that seems to enjoy nothing more than just aimlessly spinning narrative wheels and relying on lazy plot contrivances to advance the story. Here's hoping this is a sign of things to come this season.

Bottom Line: At last, The Walking Dead appears to be moving away from the plot reset problem and just-because bad decisions that have plagued the series since the first episode. Better, with the Terminus group's Gareth set up to be the season's primary villain, it looks like the show might finally be able to examine the core concept of "struggling to maintain your humanity while doing whatever it takes to survive," without implying that any evidence of thinking ahead or pragmatism means you're about to become Hitler. The season's themes are clearly foreshadowed in ways that are both subtle and hilariously over the top, and it's a goddamned relief to see black comedy balancing out the painfully dull moping that normally passes for character development.

Recommendation: Do you need one? This is the most popular show on basic cable, mainly because we all love watching zombies chomping down while survivors murder each other. Even so, If the frustratingly dumb behavior of the survivors, or the show's unrelenting dullness pushed you away, (as they did for me), season 5 looks like it might just be a course correction.

NEXT WEEK: "Strangers," written by The Walking Dead creator Robert Kirkman, in which it appears our heroes go looking for Beth.