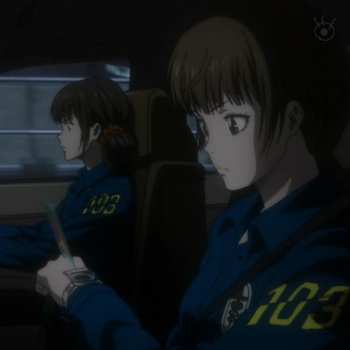 Season two begins with the news of a medicine called Lacouse that helps people keep their Psycho-Pass clear. It's become evident the Sibyl System helps a privileged few -- like Akane herself, a bright citizen who aced her exams and had many top tier companies willing to take her on as an employee -- while actively punishing those who are frustrated to the point of agitation. One such person, named Kitazawa, had high promise but has ultimately been assigned menial labor due to his cloudy Psycho-Pass. After Kitazawa detonates a bomb and accuses the Sibyl System of hurting people, the Public Safety Bureau is off to investigate and detain him.

The season two premiere has neither the level of intrigue found in the first season's premiere nor the tension to make the episode a standalone masterpiece. Akane navigates around another division so that she can de-escalate Kitazawa and lower his crime coefficient enough so that she doesn't kill him. Akane's actions are bound to have repercussions -- especially with Mika questioning Akane -- but it never really feels like there's much happening beyond an opportunity for Akane to show the audience where she stands on Sibyl's justice. The situation is resolved before it's ever allowed to build, but the premiere nails one thing: Akane's conviction.

Titled "The Scales of Justice <299/300>," Akane knows Sibyl is not infallible. Unlike Mika, who believes in Sibyl completely, Akane is willing to put her life on the line to save the lives of people Sibyl condemns to death. When Kitazawa's coefficient reaches 300, Sibyl switches the Dominator to an extinction mode.

Akane isn't the ideal inspector -- she questions Sibyl -- but at the same time, we know Akane is exactly what the Public Safety Bureau needs: someone smart who understands both why society relies on Sibyl now and the value of a person's life. To Akane, everyone matters. After empathizing with Kitazawa and making him feel needed, Akane is able to get the Dominator to switch back to the nonlethal paralyzer. After all, Akane knows the literal and figurative weight of a revolver; she knows the Dominator can be a tool rather than a guide.

It feels good to see a group of people who believe in Akane. Her character growth will probably come in parallel to people challenging the Sibyl System. The system has blessed Akane with private knowledge of its inner workings because it trusts her to work with it, but she also isn't willing to blindly trust it. In addition, Mika will no doubt provide tension as she's already stated she thinks Akane's actions are wrong. These inner tensions haven't fully materialized yet, but they're bound to increase the drama later on.