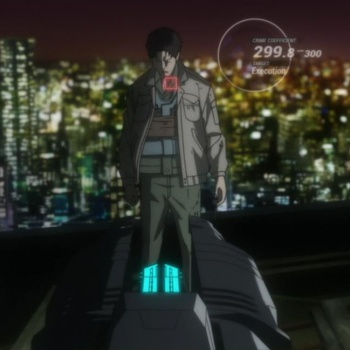 The first episode is over in what feels like no time at all. Like a good first episode, the writers introduce new conflicts in this new medicine that's able to fool Sibyl and a person at the very end of the episode who appears to be an antagonist. In this brief appearance, he reminds me a lot of Makishima, the antagonist of last season who orchestrated dozens of crimes unchecked by Sibyl, and I can only hope that he will be a different but equally interesting villain.

At the same time, the first episode doesn't allow much to happen until the teaser of an antagonist. Truthfully, it feels like a second season of Psycho-Pass is completely unnecessary. The first season wrapped up cleanly and answered all of the important questions while leaving the future up to speculation but with a clear sense that Akane would work to change the system. I'll be interested to see whether we will witness the fall of Sibyl and how this will affect people in the short-term. After all, there's also a movie confirmed to premiere after this season.

Still, this first episode shows that the writers are aware of the many questions left unanswered in the first season. Sibyl isn't going to go unquestioned. In addition, one of the new enforcers stands out -- he didn't do much this episode, but there's a focus on him in the opening theme. And what about Kougami? While there's no mention of him in the first episode, his impact from the last season's finale has affected Akane, and it's possible he'll appear in this season.

Bottom line: The premiere of Psycho-Pass 2 doesn't feel as impactful compared to the previous season's premiere, but it's a good setup for the rest of the series. Future episodes will tell us whether this will live up to the near flawless execution of the first season.

Recommendation: If you loved Psycho-Pass, the second season appears to be continuing similar themes. This first episode won't leave you on the edge of your seat, but it'll grab your attention by the end.