Felicity's skills have always been broad and undefined, but it's odd to see her doing forensics on Sara's body in this episode. It's made a little cringe-worthy when she wipes a tear from her face with a gloved hand in complete disregard of lab safety standards, but I digress. With Felicity deciding she wants to work for Ray at the end of the episode, some of the other character's new roles for the season become clear. Diggle got some key intel from A.R.G.U.S. to help track down Komodo, and while Oliver is still concerned about subjecting Diggle to the dangers of his vigilante operation, using him to replace Felicity's role as information broker is a good compromise. Roy is also a good candidate, since he seems to have at least figured out how to use Felicity's computers to scan FBI databases for Thea. Felicity also laid on the technobabble a bit more in this episode, so I expect we're likely to get a few good scenes of Diggle and Roy struggling to comprehend her computer system and the technical complexities of the work she's been doing for the team.

Laurel is also finding a new place in the Arrow Team. Her strong arm tactics (literally) uncover the link between the archer's victims. It's a triumph for unconventional, illegal methods and she rationalizes it because it succeeds. It turns out that the victims of the archers are connected by a plot to build an oil pipeline, though that doesn't really seem like something Sara would be involved in. Sara has done wet work in the home country of the company involved in the pipeline, however, so Laurel latches on to the theory. Oliver and Roy's coordinated takedown of Komodo brings us to a fantastic fight scene. The close-quarters combat, in the middle of Ray Palmer's fundraiser for the city, is followed by Oliver leaping backwards out of a window. That reckless pursuit of Komodo tells us everything we need to know about Oliver's state of mind. The fight ends with a duel between the archers, and Oliver executes a perfect finisher, catching one of Komodo's arrows, spinning, and sending it right back at him to pin him to the wall in a move that has comic book action hero written all over it. Laurel interrupts The Arrow and Komodo with a gun, ready to kill the archer for killing Sara. She goes so far as to pull the trigger, but Oliver has removed the bullets. It turns out that it's a good thing, because Komodo didn't kill Sara. His alibi checks out, and though the characters don't comment on it, it makes sense: Komodo doesn't use the signature close grouping of three arrows that ended Sara's life. Someone else had it in for Sara, and Laurel was ready to kill a man, who, despite being an assassin, was innocent of her sister's murder. 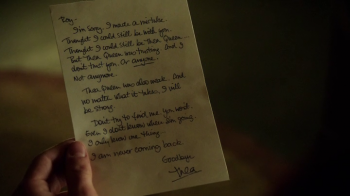 Roy Harper finally gets to talk a bit about the end of this relationship with Thea, revealing the letter she gave him at the end of season two to Oliver. He's torn up over it, and seems to have thought it best to give her some distance. Felicity's prompting, and Oliver's love and worry over his sister, lead Roy to reveal the letter. Now that Oliver knows that Thea doesn't intend to return, he's determined to find her, setting up another emotional and plot driver for Oliver this season.

"Sara" is an effective setup for Oliver's character arc this season. He doesn't want to end up dead on a slab like Sara. He needs to know if, or how, he can stop being The Arrow some day. I'm hopeful for where the season will take this, but right now Oliver's motivation, despite being an important and interesting question, feels shallow. The premiere didn't give the characters enough space to feel much of what happened, only to act. Diggle gets grounded, and he comes back to the team after Sara's death, but he wasn't gone long enough to be missed, or to feel like he really has something to lose by coming back into the fold. Laurel's in pain over the loss of her sister, but we barely spent any time with her in a level emotional space before she is plunged into grief. Felicity is working retail, but we don't see it grating at her and her dreams and expectations for herself for long before she joins up with Ray. Splitting the premiere into two episodes, or even three, would make those emotional beats louder and more meaningful. "Sara" starts to make up for that speedy delivery of plot.

Bottom Line: "Sara" is back to the style of Arrow episodes I expect, with a lot more emotional depth than the premiere. Laurel is the one to watch here, with her development towards being a vigilante likely to be a major story this season.

Recommendation: Arrow has regained my confidence with this episode, delivering solid action and giving the characters space to feel. Let's hope the show keeps it up.